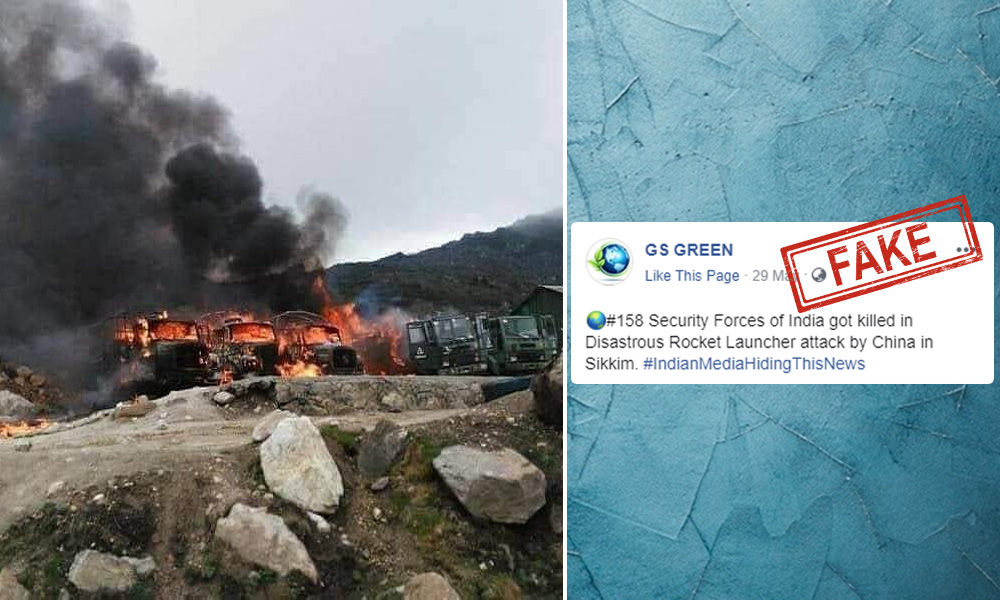 In connection to this incident, an image showing army vehicles set on fire is being circulated on social media with the claim that 158 Indian soldiers were killed in a rocket attack by the Chinese army in Sikkim.

"Clashes erupted btw #Indian and #Chinese forces in Naku La sector of North Sikkim", "#158 Security Forces of India got killed in Disastrous Rocket Launcher attack by China in Sikkim. #IndianMediaHidingThisNews," reads the caption of one such post.

Viral Pictures Are From 2017

A reverse image search led to reports by Pakistani and Chinese media outlets back in July 2017. During the Doklam standoff which occurred in 2017 between India and China, the viral images were circulated with a piece of similar fake news that "158 Indian soldiers were killed by the Chinese army."

Reportedly, on June 8, 2017, China had initiated a manoeuvre in Doklam. A platoon of China's People's Liberation Army (PLA) allegedly moved into the plateau and razed stone bunkers that the Royal Bhutan Army (RBA) had constructed years ago. This move had triggered a chain of events that led to a dangerous standoff between India and China.

Back then both the countries, India and China had termed these reports as fake news.

According to an India Today report published on July 18, 2017, Pakistani media outlets had reported on how Chinese soldiers have killed 158 Indian jawans despite the calm in Doklam where the armies of India and China were engaged in a stand-off for about a month in 2017.

The report added that old photos and videos were passed off as that of a new attack.

"No cognisance should be taken of them by responsible media," a spokesperson of the Ministry of External Affairs was quoted as saying on the Pakistani media reports.

The report carried several Tweets on the issue, dating back to 2017.

Wonder what Dawn's "source" is on this report: The Indian Army or the Chinese Army? pic.twitter.com/uHxGdC0loY

The Logical Indian could not independently verify the date and location of these viral photos. However, it is clear that these photos have no connection to the recent tension at the Indo-China border.

It is noteworthy to mention that no reports could be found on the death of 158 Indian soldiers at the hands of the Chinese army, therefore that too is a misleading claim.

There were however reports from May 2017 which talk about an accidental mortar explosion in an army camp in Tawang, Arunachal Pradesh. A soldier lost his life to the mishap and six others were injured.

According to the report, a mortar shell exploded short of its target in May 2017, during exercises at a firing range near Arunachal Pradesh's Tawang.

The incident had occurred in an area bordering China, about 35 km from Tawang-Gamrala area.

A technical defect was suspected to have caused the mortar shell to fall short of its expected range.

Reportedly, local army sources confirmed that the viral picture is of the same incident. The Logical Indian could not independently verify the same.

Also Read: Fact Check: Old Picture Of A Group Of Man Holding A Chinese Flag Near A Lake Shared As Recent Development In Ladakh