A video is circulating online which show a verbal dispute between Indian and Chinese soldiers along the India-China border. It is being claimed that the video is from the clash that occurred in May 2020. 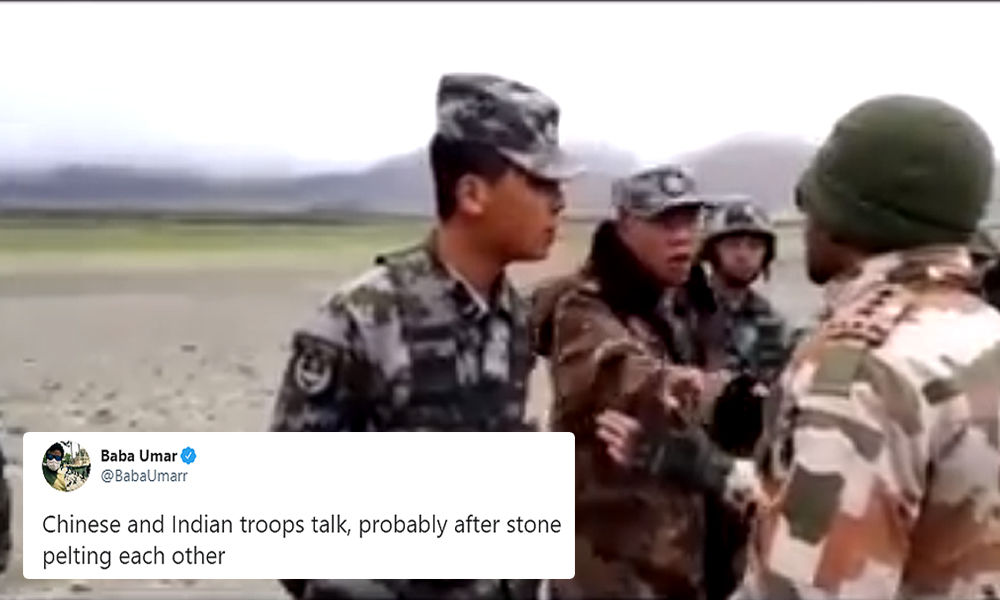 Following this, a video started circulating on social media platforms which showed a verbal dispute between Indian and Chinese soldiers along the India-China border. It is being claimed that the video is from the clash that occurred in May 2020.

Some claimed that it shows Chinese and Indian soldiers talking after possibly stone-pelting each other. Further, the one-minute, 51-second video has been shared with the same claim several times on Facebook.

According to an AFP report, the Chinese soldier's remarks are, "You tell him, I'll be on duty in his area. Get out, you tell him to get out, otherwise, they will bear the consequences. Get out, I don't like them. If they don't leave, I'll call the bombers to let them all die in this place (translated to English)"

The video is from the recent skirmish at the Sino-Indian border.

The video has been circulating online on various platforms since at least January 2020.

The title of the video reads, "Chinese army arguing with Indo Tibetan Border Police (I.T.B.P.) in Border of Arunachal Pradesh"

The ITBP is the official portal of the Indo Tibetan Border Police, Ministry of Home Affairs, Government of India. According to the official website, ITBPF was raised on 24 Oct 1962. The ITBP is currently deployed on border guarding duties from Karakoram Pass in Ladakh to Jachep La in Arunachal Pradesh covering 3488 km of Indo-China Border and manning Border Outposts on altitudes ranging from 9000' to 18700' in the Western, Middle and Eastern sectors of the Indo-China Border.

ITBPF is a specialized mountain force and most of the officers and men are professionally trained mountaineers and skiers. Being the first responder for natural disasters, ITBPF is involved in carrying out numerous rescue and relief operations across the country.

Screenshots from the video clearly show the uniform worn by an Indian soldier which bears the acronym "I.T.B.P." on the shoulder. A keyword search led to a report by a Chinese website, dwnews.com The article says that the video was being circulated since mid-January in light of conversations about the establishment of a military hotline between the India-China border.

The Economic Times published on January 11, 2020. According to the report, "This hotline had faced several roadblocks in the past because of the differing views of both sides…Both sides see hotlines as a necessity for better interaction between their armies and to defuse tensions caused by differing perceptions of the LAC."

Therefore, while The Logical Indian could not independently verify the time and place of the viral video it is clear that the video was shot much before the recent classes at the Indo-China border.

Claim Review :  The video is from the recent skirmish at the Sino-Indian border.
Claimed By :  Social Media posts
Fact Check :  False
Suggest a correction