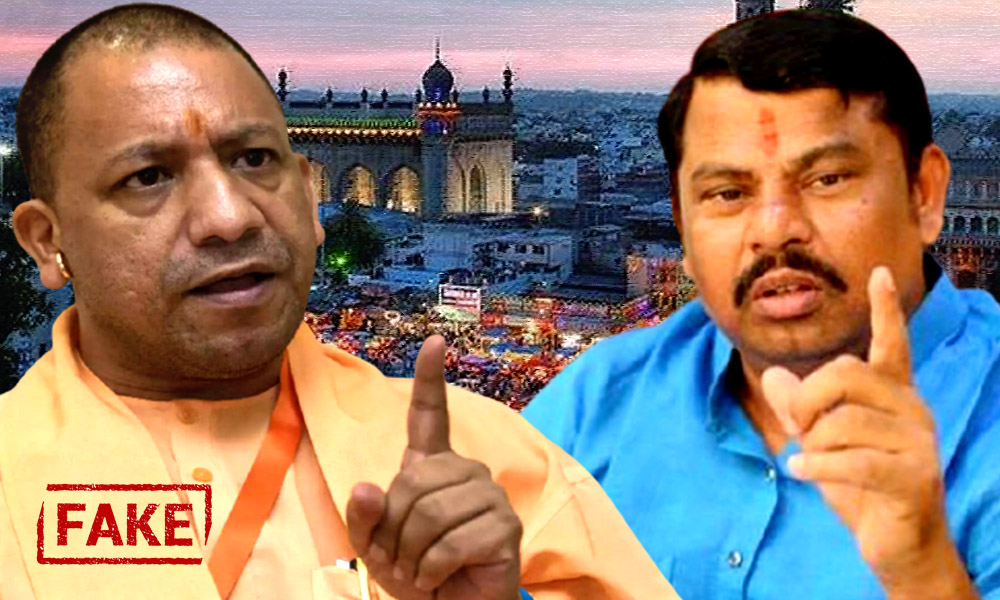 Fact Check: Reality Behind Claim That Hyderabad Was Once Bhagyanagar Named After A Dancer Bhagmati

UP CM Adityanath in GHMC election campaign claimed that he will change the name of Hyderabad to Bhagyanagar which according to many was the previous name of the city. The Logical Indian Fact-Check team investigates the claim.

Greater Hyderabad Municipal Corporation (GHMC) elections were held today (December 1, 2020). TRS, AIMIM, Congress and BJP are the four major political parties who are at loggerheads in this poll.

It is not for the first time that changing the name of Hyderabad to Bhagyanagar has been proposed by BJP during its election campaign. In 2018, BJP MLA of Goshamahal assembly constituency of Telangana, T. Raja Singh had proposed the plan of renaming Hyderabad as Bhagyanagar if BJP won Telangana Assembly Elections 2018. Raja Singh in his statement to ANI said, "Earlier, Hyderabad was Bhagyanagar and in 1590 Quli Qutub Shah came to Hyderabad, he changed Bhagyanagar to Hyderabad. At that time many Hindus were attacked, many temples destroyed. We are planning to rename Hyderabad. In Telangana, BJP will win in the majority and then our first aim will be developing the state and the second objective will be renaming Hyderabad as Bhagyanagar. We will also change the names of Secunderabad and Karimnagar."

According to an article published in Deccan Chronicle, "In 1591, the name of the city was Golconda-Haidarabad. Then it was found that Golconda was too crowded and it was not possible to expand in the walled city. Though the name was spelt little differently, a new city emerged as Hyderabad, that owed its name to the earlier city."

The 'Farmaans' or the documents archived dating back to 1884 also speaks of Hyderabad but Bhagyanagar is not mentioned.

While many say Hyderabad was earlier called as Bhagyanagar after the name of Muhammed Quli Qutb Shah's love interest Bhagmathi, Mr Haseeb Jafferi, Sufi Trails leader has refuted the claim saying, Bhagmathi is an anecdote and no evidence of a woman with this name found in history. The two women who are described in Hyderabad's history are Taramati and Pemmamati whose graves are also found, but no evidence of Bhagmathi is found in the history of Hyderabad.

According to Telangana Tourism, when Quli Qutub formed his dynasty, Qutubshah in 1518, he shifted the capital from Golkonda to Hyderabad on the banks of the River Musi. The State of Hyderabad was eventually founded by Mir Qamruddin Chin Qilich Khan. Later, he conferred himself the title of Asaf Jah, by which title the dynasty is still known.

The Print quoted historian Narendra Luther, who said property documents were found in the Hyderabad archives department that said was signed with the name, "Qazi of Bhaagnagar."On which, Hyderabad-based historian Capt. Panduranga Reddy (retd), who has researched the city's origins said that Hyderabad was actually built around a small village called Chichulam after the area around Golkonda Fort faced plague epidemic and the entire township sought asylum. As people began settling around the area, they built several gardens and open spaces making it more of a garden."

According to a report by Free Press Journal, many historians believe Hyderabad was once named as Baaghnagar but it was derived from the Urdu word, Baagh which means garden. Since there were many gardens in the city hence it was called Baaghnagar, completely unrelated to the story of the queen.

Another article by The Print said historian Narendra Luther found the lore of Bhagmati was chronicled by several visitors, specifically three European travellers Thevenot De Vernier, Manucci and Methwold wrote extensively about the dancer. In the same article, Prof Salma Ahmed Farooqui of the Centre for Deccan Studies at the Hyderabad-based Maulana Azad National Urdu University was quoted denying any conclusive evidence for the existence of the danseuse.

There is a controversy over the name Bhagyanagar, while a few historians claim that Hyderabad was earlier called Bhagyanagar based on the love-interest of Quli Qutub Shah, Bhagmati, many historians say there is no conclusive evidence to prove the claim.

The rule to change the name of a city, town or state

The method to change the name of a place is written in a letter by Sardar Fateh Singh, the then Deputy Secretary in the Ministry of Home Affairs in 1953. The letter was sent to state governments as a rulebook for them to refer to before sending proposals for changing the name of the place.

The letter mentioned that changing name should be discouraged and must only be done if there is a compelling reason to justify the change of name. The letter also mentioned that the state cabinet must send the proposal to the Ministry of Home Affairs before any change is made. There are five broad criteria under which name of place/town/city/ state must be changed.:

1. Unless there is some very special reason, it is not desirable to change the name of a place which people have got used to.

2. Names of Villages etc. having a historical connection should not be changed as far as possible.

3. A change must not be made merely on grounds of local patriotism or for linguistic reasons, e.g., villages etc. should not be renamed after national leaders just to show respect to them or for satisfying local sentiment in the matter of linguistic etc. (An exception can, however, be made in the case of martyrs whereby the name can suitably be added to the name of a place sought to be changed if a request is made by the state government and there is general recognition of the role of martyr in national life).

4. In selecting new names, care should be taken to see that there is no village or town etc. of the same name in the state and neighbourhood, which might lead to confusion.

5. While recommending any change, the State Government should furnish detailed reasons for proposing a change in the name and also for selecting the new name.

One thing to notice here is that change in name can be proposed only by the State government and not by Municipal corporation. Since BJP has only two out of 119 elected members in Legislative Assembly of Telangana which is currently being governed by TRS. Thus, even if BJP wins the GHMC election until the State government does not want to take up the issue of changing the name of Hyderabad, it cannot be rechristened.