Both the attackers and victims belong to the Muslim community. There is no communal angle in this matter nor is it related to the movie The Kashmir Files.

A CCTV footage of a man attacking people with a sword is going viral on social media. In the viral video, two men armed with a sword and a iron rod can be seen attacking a group of Muslim people sitting inside a shop. In defence, people sitting inside the shop are also seen throwing objects at the attackers. It is being claimed that Hindu goons attacked a Muslim shopkeeper with a sword after watching The Kashmir Files. The post also warns Muslims to be prepared for such incidents in future.

Bollywood Film 'The Kashmir Files', directed by Vivek Agnihotri, was released on March 11 and is claimed to depict the plight of the Kashmiri Pandits and their forced exodus from the valley during the peak of insurgency in the early 1990s. The film has been in the news since its release because of anti-Muslim narrative.

[English Translation: This is all a scene after watching the movie Kashmir Files! Muslims should always be ready for their security, defence, because terrorists will now openly terrorize.] 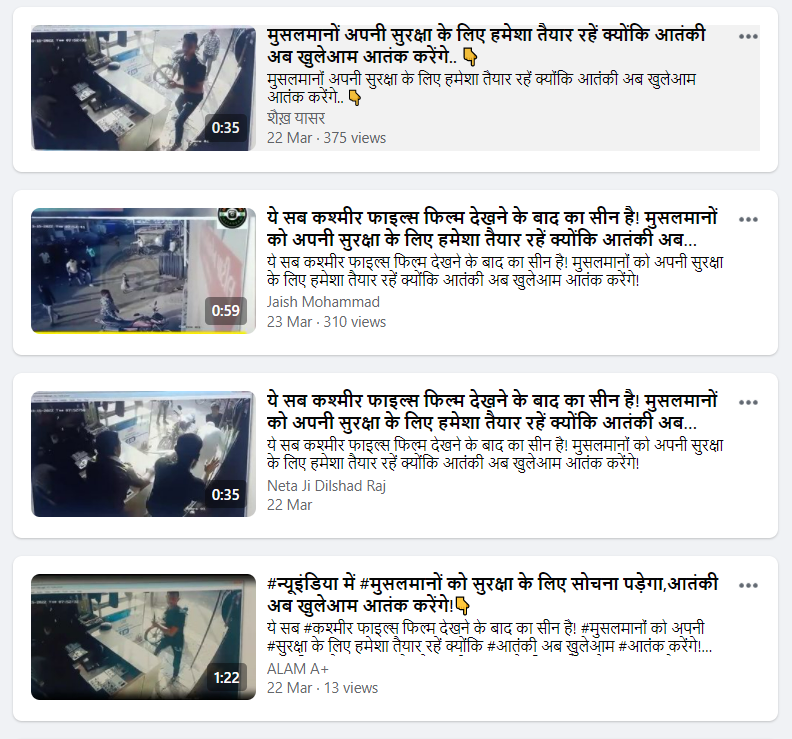 Hindu goons attacked a Muslim shopkeeper with a sword after watching 'The Kashmir Files'.

The Logical Indian Fact Check team verified the viral claim and found it to be false. The viral video is not related to The Kashmir Files and the attackers are from the Muslim community.

During the initial investigation, we extracted different keyframes from the viral video using the InVid tool and conducted a Google reverse image search. It led us to a tweet done by News18 Gujarati in which similar footage can be seen. The caption of the tweet reads, "Terrorists in Surat, shopkeeper attacked with sword, incident captured on CCTV #Surat #Gujarat."

Taking a hint from it, we did an open keyword search and found the still of the viral video in a report of News18 Gujarati dated 20 March 2022. According to the report, the viral video is from Surat, Gujarat. It was a case of illegal extortion. This incident has been told of the Salabatpura police station area of ​​Surat. Some anti-social elements had demanded money from the shopkeeper in the Bhate area of ​​​​Salbatpura police station for illegal recovery. When he resisted, the shopkeeper was attacked with a sword. The entire incident was recorded on CCTV. There is no report of any loss of life. Boom, a fact-checking website contacted Police Inspector, Salbatpura police station for more details. He said that the incident took place on 15th March. The groups had an internal dispute that resulted in the attack. Both the attackers and the shopkeeper are Muslims. This incident has no relation with the recently released movie 'The Kashmir Files'. According to the FIR filed in the case, 10 of the 11 accused named in this case are from the Muslim community.