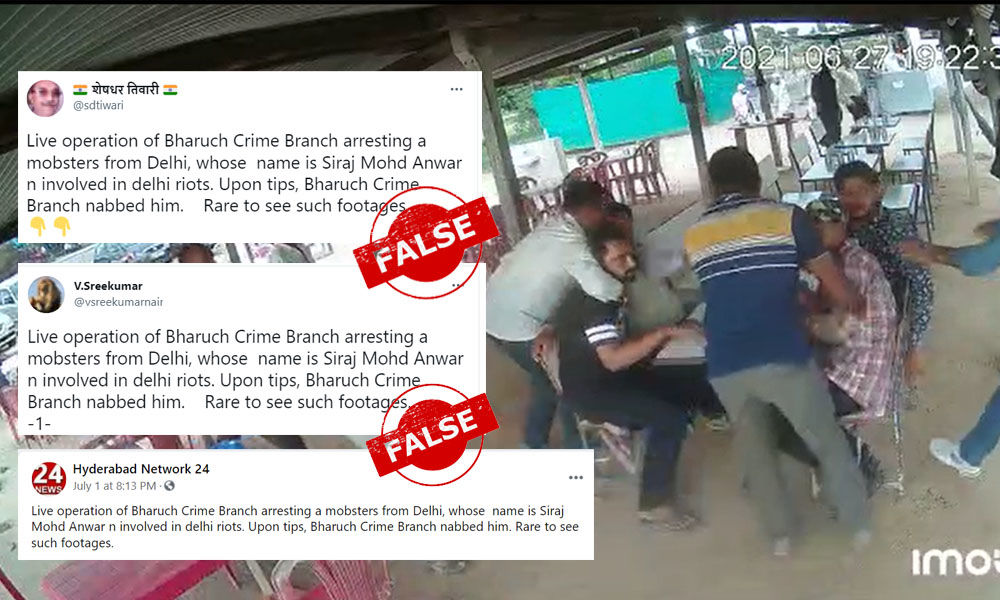 A video of policemen in plain dresses arresting four people is circulated on social media via Twitter, Facebook, and WhatsApp with a claim that the video is of an operation carried out by the Bharuch Police in Gujarat and they arrested a man named 'Siraj Mohammad Anwar', an accused of the Delhi riots case.

The video was shared on Twitter from the handle @sdtiwari on 1st July with the caption: "Live operation of Bharuch Crime Branch arresting a mobster from Delhi, whose name is Siraj Mohd Anwar n involved in Delhi riots. Upon tips, Bharuch Crime Branch nabbed him. Rare to see such footages."

The video was also posted on the @kreatelyOSINT page. The post has 133 shares and 321 likes.

2 mobsters including Siraj Mohd Anwar, who was also allegedly involved in Delhi Riots was nabbed after a tip off.

What you are watching is a rare op to have been captured on Camera.https://t.co/nAs7VbZTkS

The viral video was carried out by Hyderabad Network 24 on their Facebook page with the same claim that the Bharuch Crime Branch has arrested Siraj Mohd Anwar for being a part of the 'anti-Hindu Delhi riots'.

The video was posted on a Facebook page named Mission Modi too.

The video which went viral claiming Bharuch Crime Branch has arrested Siraj Mohd Anwar, an accused in the Delhi riots, is false. We found that the video is from an eatery in Gujarat's Amarpura Village in Saraswati taluka of Patan District. The name of the person being arrested in the video is Kishor Luhar, and the operation was done by Ahmedabad Crime Branch.

While doing a keyword search, we got hold of reports done by the Times of India and Indian Express. The report says that the arrest was made on June 27 evening, the accused name was Kishor Luhar. Luhar was accused of 140 offences, including robbery and rape cases, filed against him in several areas, including Ahmedabad and Banaskantha district in Gujarat and Sirohi and Jhalor districts in Rajasthan. He was considered as "most wanted criminals".

Along with Luhar, three others were apprehended in the operation. Police had recovered a pistol, a magazine, and five live cartridges from the accused in a small eatery of Amarpura Village in Saraswati taluka of Patan District, Gujarat. This operation was carried out by Ahmedabad Crime Branch and had nothing related to the Delhi riots case.

Indian Express reported on 30th June that a man named Siraj Manzur Alam Ansari was arrested by Bharuch Crime Branch under Arms Act. The police have confirmed that the suspect, carrying two pistols, 19 cartridges of 7.65mm, was arrested from Darol Chokdi highway in Bharuch.

Bharuch Crime Branch has clarified the person arrested has nothing to do with Delhi riots and tweeted, "There is no link to Delhi riots case so far. We have not found any connection between the accused and the Delhi riots case yet. Anwar was arrested after we seized weapons from him."

Hence, the claim made by the social media posts is false.