The Logical Indian Fact Check team investigates the claim that Government of India under the newly launched 'PM Kalyan Aashirvad Yojana' is distributing ₹ 2000 to every girl in the country.

A piece of news is doing the rounds which claims that a new government scheme has been launched which will provide every girl child Rs 2,000 in cash. This scheme is called 'Pradhanmantri Kaniya Ashirwaad Yojana.' Government of India under the newly launched 'PM Kalyan Aashirvad Yojana' is distributing ₹ 2000 to every girl child in the country.

Usually, all the schemes launched by the Central government related to the welfare of women and child are listed on the website of the Ministry of Women and Child Development.

However, the 'PM Kalyan Aashirvad Yojana' is not listed on the ministry website. On searching 'Pradhanmantri Kaniya Ashirwaad Yojana' in the Government of India web directory, no results came up. The GOI web directory is a one-point source to access all Indian Government Websites at all levels and from all sectors.

A reverse image search of just the image from the viral posts on Google led to a report on News18, where the full-size image was found. The report says that the photo was taken on the occasion of Rakshabandhan when a child brought the national flag to greet PM Modi. Below is a screenshot of the website (Translated to English): The website mentions at the bottom that the information mentioned there is 'false and misleading'. 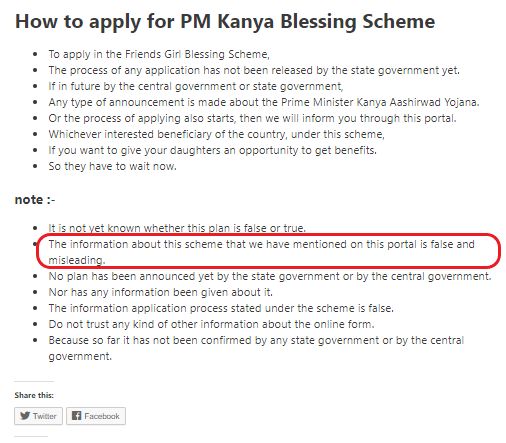 It is noteworthy to mention that a website propagating fake information has options for sharing on social media platforms.

On searching for the website on 'Domain Tools' it says that the website was last updated on July 16.

So, we can conclude that contrary to viral claims, no such scheme has been launched by the government.