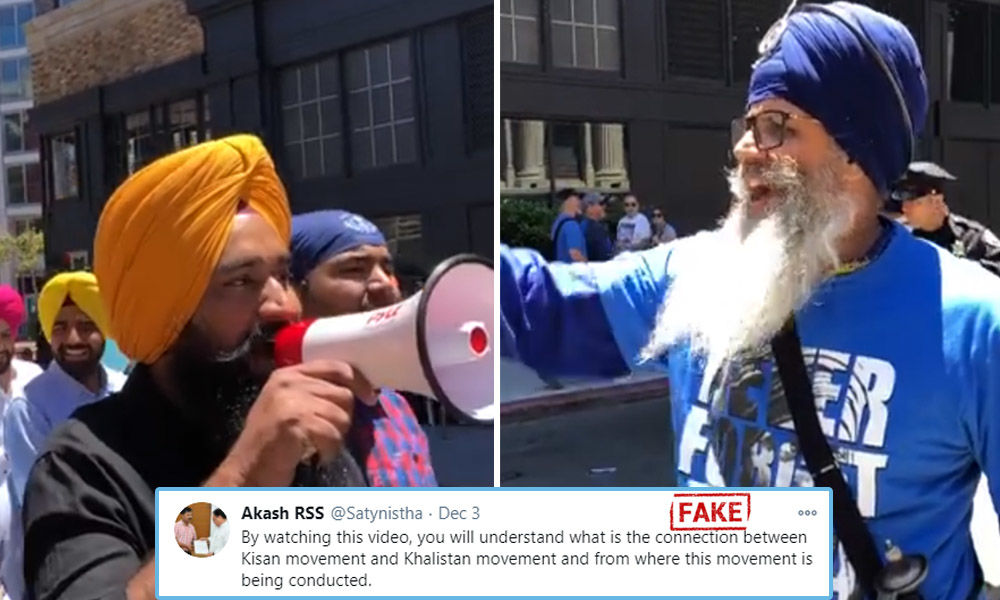 An old video of a Pro-Khalistan rally in San Francisco has been shared on social media as a video from the ongoing farmers' protest.

Many farmers hailing from Punjab are protesting in Delhi against the three farm laws since November 26. Farmers believe that certain sections of the law will deprive them Minimum Support Price.

Many BJP supporters are sharing a video in which Sikhs are seen raising pro-Khalistan slogan and anti-India slogan with the claim that it is a part of the ongoing farmers' protest. In the video, a group of people are hailing Khalistan and also saying, "गली गली में शोर है भारत माता चोर है' (There is a noise in streets that Mother India is a thief).

The video is being shared to defame the protest and prove that the protest is politically motivated and has been 'hijacked' by Congress and Khalistanis. The video is being shared with the caption, "इस वीडियो को देखकर आपको समझ आ जायेगा कि किसान आंदोलन और खालिस्तान मूवमेंट में क्या कनेक्शन है और ये आंदोलन कहाँ से संचालित हो रहा है (By watching this video, you will understand what is the connection between farmers protest and Khalistan movement and from where this movement is being conducted)."

The video went viral on Twitter and many people including Shalabh Mani Tripathi, BJP spokesperson of Uttar Pradesh also shared the video.

The Logical Indian did a reverse image search of keyframes using InVid tool and found the same video was shared by a Facebook user on June 28, 2019.

A much clearer video of the protest was shared by a Facebook page, Jugraj Singh Kahlo on June 15, 2020, with the caption "San Francisco Independence March 2018." We observed that people in the video are wearing a blue T-Shirt, which has, "Stand against injustice, March for freedom for Khalistan, San Francisco," written on it.

Remembrance March and Freedom Rally is an annual procession held in downtown San Francisco by Sikhs with the purpose of enlightening people about Sikhism and also to draw the attention towards widespread and longstanding mistreatment of Sikhs and other religious minorities in India, according to KQED News.

While we were not able to identify the year when the procession took place, we were able to conclude that the video is not from the ongoing farmers' protest.