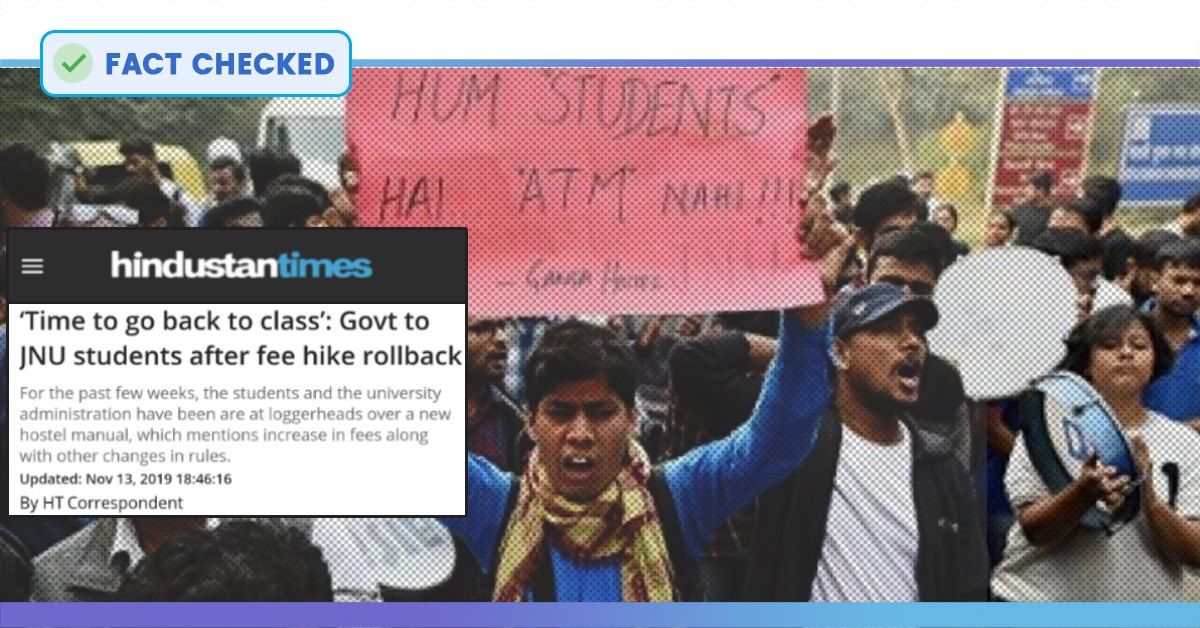 Fact Check: Whether Price Hike Rollback Of JNU Is Indeed A Major One?

Following a 16 days protest, on Wednesday (13 November 2019), the Jawaharlal Nehru University (JNU) administration finally decided to ‘partially’ rollback the hostel fee hike but the headlines put by several media organisations as well as the tweet of HRD minister of India were misleading as they gave the impression that the administration has rolled back all the hikes which were earlier announced.

Headlines of many media organisations including of ANI and Hindustan Times missed mentioning ‘partial’ fee rollback instead they just said rollback.

“JNU Executive Committee announces major rollback in the hostel fee and other stipulations. Also proposes a scheme for economic assistance to the EWS students. Time to get back to classes,” HRD Secretary R Subrahmanyam tweeted on Wednesday.

#JNU Executive Committee announces major roll-back in the hostel fee and other stipulations. Also proposes a scheme for economic assistance to the EWS students. Time to get back to classes. @HRDMinistry

There is “major roll-back in the hostel fee” of JNU as tweeted by India’s HRD minister R. Subrahmanyam and declared by the headlines of media reports.

Why are the JNU students protesting?

A draft of a hostel manual which circulated on October 4 announced fee hike applicable from October 28. The students were shocked to find the college administration has hiked their hostel fees multifold without consulting them. The hostel mess security deposit was increased to Rs 12,000 from Rs 5,500.

Apart from this, the authorities also increased hostel fees from Rs 20 to Rs 600 for a single room, and from Rs 10 to Rs 300 for a shared room. The students will also have to pay Rs 1,700 for maintenance services. The hostel manual also had provisions for dress code and curfew timings, students were agitating against these rules as well.

The decision of partial rollback decision was taken in Executive Council (EC) meeting. According to the latest press release of JNU after the meeting, the room rent which was raised to Rs 600 from Rs 20 for single occupancy will now be Rs 300 but only for students below the poverty level (BPL). Similarly, for double occupancy, the amount will now be Rs 150 for BPL students only, which was earlier hiked from Rs 10 to Rs 300. For the rest of the students the hike is going to remain unchanged.

So, definitely it cannot be termed as a total rollback of the fee hike, though it can be called as ‘corrective changes’ or ‘partial rollback’. Also, another bone of contention, which is the newly introduced utility charge of Rs 1,700 has neither being removed nor reduced.

“Our issue substantively is not just with the room rent but the Rs 1700 service charge, water and electricity charge which was zero and has been steeply hiked,” said JNU Students’ Union to the media.

After it became clear that the partial rollback was announced only for the students who are below the poverty line (BPL), the JNU students’ union slammed the centre, calling the announcement “eyewash”.

“We reject this sham propaganda and selective usage of facts which is eyewash. The HRD secretary, while announcing the so-called rollback, has the arrogance to advise us to: ‘go back to classes’. With the fee hike still in place, not only students will be going out of classes but also out of the JNU,” the student union said in a statement they put out to the media.

However, it was decided in executive meeting that the hostel manual won’t have anything related to hostel entry timings and dress code.

So, according to the information put forward in press release issued by the JNU authority one can easily say that the rollback is not a ‘major’ one. It is partial in every sense.