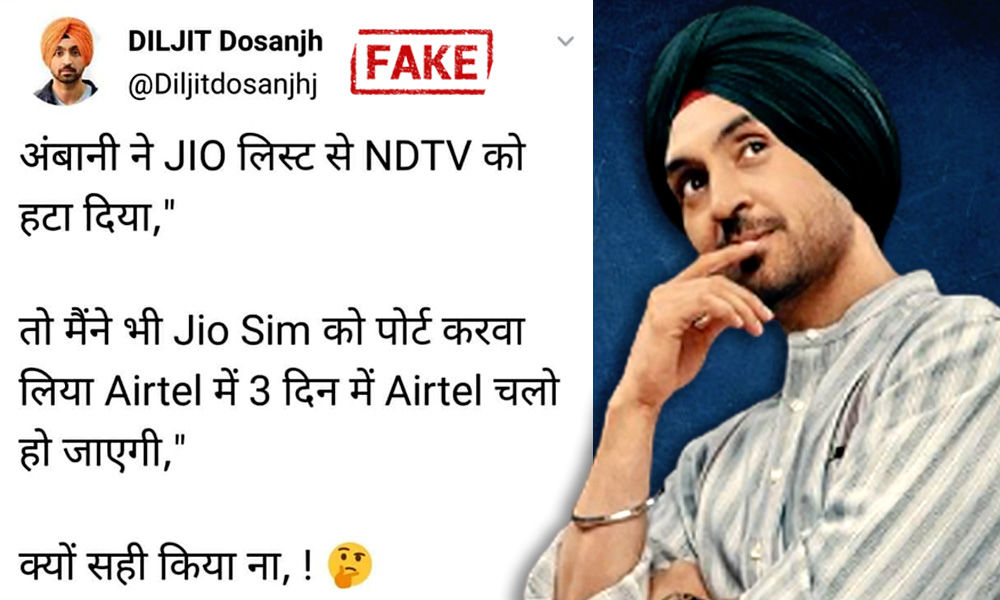 A screenshot of a tweet from Diljit Dosanjh's parody account has gone viral with the false claim of him boycotting Jio sim card as Jio removed NDTV from the list of its advertisers.

Screenshot of a tweet purportedly of Punjabi singer and actor, Diljit Dosanjh is being widely shared on social media.

Earlier, Dosanjh had come forward in solidarity with the farmers protesting in Delhi against the three central farm laws.

On December 5, 2020, he visited the protest site at Delhi-Haryana (Singhu) border. It is being speculated that the Centre has passed the new laws to support big corporations like Reliance Industries Limited and Adani enterprises. Thus, to show solidarity with the protesting farmers, many people are boycotting Jio sim cards, as Jio is owned by Reliance Industries Ltd.

Diljit Dosanjh tweeted about porting Jio Sim to Airtel as Jio removed NDTV from the list of its advertisers.

Diljit Dosanjh has a verified Twitter account with a blue tick. The Logical Indian observed there was no blue tick on the Twitter handle @Diljitdosanjhj that had tweeted the claim. The Twitter handle is named, "Diljitdosan parody" and was created in September 2020.

The original Diljit Dosanjh's verified Twitter handle @DiljitDosanjh has over 4.6 million followers and was created in 2011.

We searched and found there are many similar parody accounts of Diljit Dosanjh on Twitter.