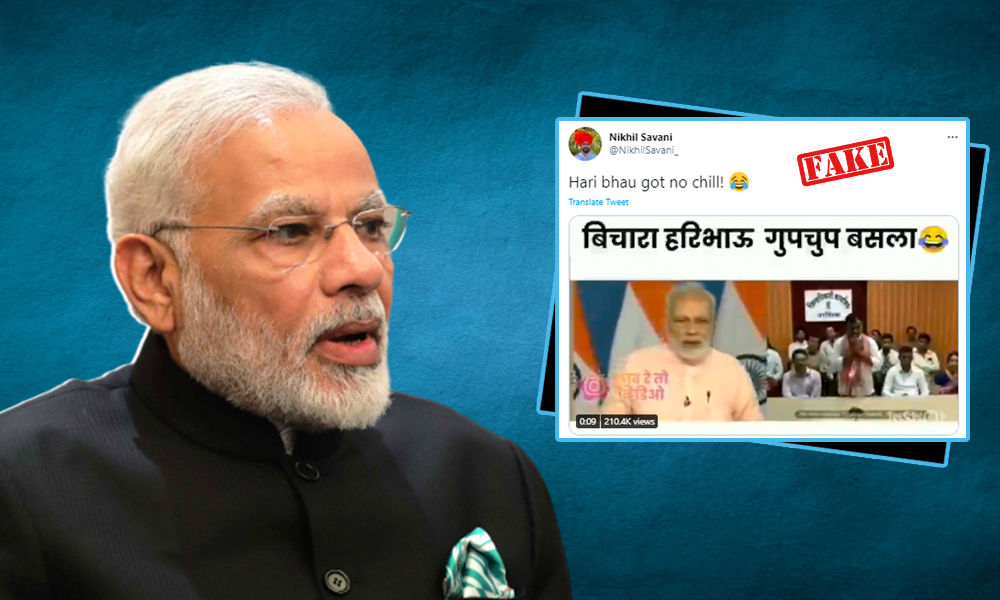 Almost three years old edited video of PM Modi trying to avoid talking about petrol price with a group of people is being shared on social media. The Logical Indian Fact Check team debunks the claim.

A viral post with a video showing Prime Minister Narendra Modi having an online interaction in Marathi is making rounds on social media. In the video, a person named Hari is seen being given a chance to ask his question to PM Modi. As Modi initiates the conversation in Marathi, Hari starts asking a question about the hike in petrol prices. Modi is seen avoiding the question and asking him to sit down.

This 13 seconds video was first shared by a Twitter user @AzyConTrolI on February 7.

In the video, Modi can be seen greeting the man in Marathi. The same video clip was shared by few verified accounts too. Saral Patel, National Convenor from Congress Social Media Department and Vishal Chaudhary, National General Secretary at National Students' Union of India tweeted the same video clip with a caption that says, "Hari bhau got no chill!".

Hari bhau got no chill! 😂 pic.twitter.com/4knpu8hTeh

The video clip shows PM Modi avoiding a citizen's question about the hike in petrol prices and asking him to sit down.

The Twitter user who posted the video first, later in the same thread has clarified that it is an edited video and attached the real video link. He mentions, "The video above is edited ofc and was done merely for entertainment purpose. Here's the original link"

The video above is edited ofc and was done merely for entertainment purpose. Here's the original link :https://t.co/gE6zxWJkvd

In the original video from ABP Majha, the PM can be seen addressing the locals from Nashik in Marathi from 0:27. The video is titled in Marathi, "New Delhi: Prime Minister Modi's dialogue with Hari bhau, the beneficiary of Mudra Yojana, in Marathi." This video was uploaded on YouTube on May 29, 2018.

By doing a keyword search about Modi's interaction about Mudra Yojana, two YouTube videos uploaded by the official accounts of Narendra Modi and PMO India show up. Both the videos have the original clip of PM talking to Hari bhau.

Here, PM can be seen interacting with the man from 19:25 and from 0:02 in both the respective videos. In the full-length videos, Hari bhau has not mentioned anything about the petrol prices.

Unlike the original video, the edited video clip has a watermark below on the left side which states the Instagram account of @Lav_Ray _To _Vhidio. This account makes comedy videos.

The original video of the discussion from PM Modi's channel (left) and the edited video with a watermark (right).

Hence, the video going viral on social media of Modi avoiding a man's question about the petrol prices is edited.