Fact Check: Video Of Police Detaining People For Not Wearing Mask Is Not Of Delhi

A video from Madhya Pradesh has gone viral on social media with a false claim of Delhi Police arresting those without a mask and keeping them in jail for 10 hours.

A video of policemen catching people not wearing a mask is being circulated with the claim that Delhi police is arresting people who are violating mask guidelines and putting them in jail for 10 hours.

The video is viral on social media with the caption, "Without mask 10 hours jail in Delhi and soon to be followed in Mumbai, Bangalore, Hyderabad and other Cities."

The same video is also being widely shared on Facebook.

Another video from the same incident is also viral. 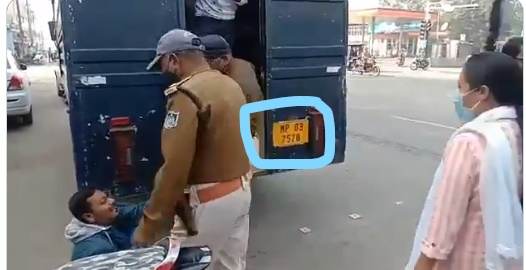 On searching with the keyword 'Madhya Pradesh police, mask', we found a report by Zee News, where the same video was published. The news was published on November 22, 2020, and said that Ujjain police arrested many youths violating mask rules amid the pandemic and kept them in open jail for 10 hours.

According to a report published by News 18 on November 23, the incident is of Koyal Phatak Chauraha, Ujjain and the youth in the video was trying to escape the arrest by lying on road but later the cops carried him to the police vehicle.

According to a report by The Quint, Head Constable at Chimanganj Mandi PS confirmed that the drive was carried out by Ujjain police to create awareness amongst the common people and ensure that the mask is worn by everyone. The report also says that Deputy Commissioner of Police, New Delhi and Delhi Police PRO, Eish Singhal, denied the claim of any such actions in Delhi.

Thus, a video from Madhya Pradesh has gone viral with the misleading claim that video is of Delhi.