Social media influencer Tarunnam Khan claimed that she married her father Ayub Khan and the post of her has gone viral on social media. The Logical Indian Fact Check team investigates the claim.

Many people on social media are sharing posts claiming that Congress leader Ayub Khan from Hyderabad married his own daughter 'Tarunnam Khan'. The post is being shared to not just malign the image of the Congress but also to show Muslims as incestuous.

The Logical Indian received the screenshot of the post shared on Facebook on its WhatsApp Fact Check number +91 6364000343. The screenshot had following text in it, "हैदराबाद के "कांग्रेस नेता"अयूब खान" ने अपनी ही बेटी "तरुन्नम खान" से निकाह कर लिया..??" (Which translates in English as, "Hyderabad's Congress leader Ayub Khan gets married to his own daughter Tarunnam Khan.") In a Facebook group 'पुष्पेन्द्र कुलश्रेष्ठ- Pushpendra Kulshreshth' which has over 62,000 members, the same claim is shared. The Logical Indian searched for the post and found that the same claim also went viral on Facebook in the last week of September 2020. In the shared post, we found a screenshot of a social media post of Tarunnam Khan wearing a wedding dress and shared with the caption, "Got married with my Dad Ayub Khan. I'm nervous I do not have marriage experience." We then searched for Tarunnam Khan on Facebook and found a Facebook page with her name. On scrolling down the page we found that Tarunnam is a social media influencer. We also found the same image of Tarunnam Khan on her page with the caption "White Attire", posted on 28 September. 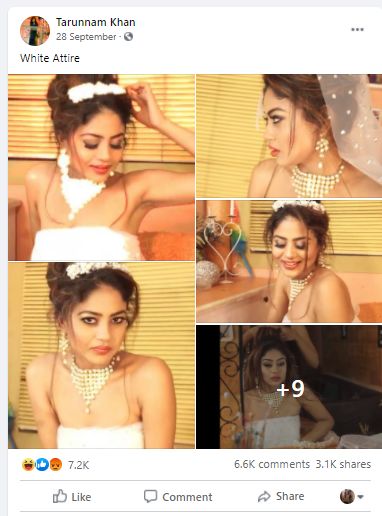 We also saw edited photos of her with Ayub Khan uploaded on the comment section of Ayub Khan's posts. We also saw her posting a video where she is sending birthday wishes to Indian cricketer Virat Kohli claiming him to be her husband.

She has shared many contents about her and Ayub Khan's relation but none of her statement made any sense. From her posts, it looked like that most of her posts are attempts for sensationalism and to grab eyeballs. They also looked like an attempt for satire.

On one of her posts, she tagged Ayub Khan. Based on which we found the profile of him. Ayub Khan has mentioned himself as the social activist and his cover photo showed him to be a Congress MLA from Bahadurpur.

On searching more details about Ayub Khan, we found he is a rowdy sheeter who claimed that he would be contesting in Telangana Assembly elections from Bahdurpur constituency of Hyderabad on Congress' ticket. But based on the details available on Election Commission's website, Shaik Mohd Kalemmuddin contested from Indian National Congress on that seat. Even Shaik lost against AIMIM's Mohd. Moazam Khan, who has constantly been winning on the seat since 2009.

On asking Ayub Khan's son AK Khan about Tarunnam Khan marrying Ayub Khan, he rubbished the claim by saying, " We are five brothers and have no sisters." He also said, " We are aware of posts of her and have filed an FIR against Tarunnam but due to coronavirus pandemic, the police has not yet taken any action." He also said that his father, Ayub Khan is in jail for three years so the claim made by the girl falls flat. On asking his mother's name, he denied to reveal that but assured us that his father has only one wife and that is his mother.

We also asked the reason why Tarrunam Khan made such claims against AK's father on which he called it a 'cheap tactics to gain popularity.'

On asking about his father's connection with Congress, AK Khan said that he was to contest elections from Bahadurpura constituency of Telangana during 2018 Assembly elections from Congress party but he got arrested.

On speaking to a local reporter, we found that Ayub Khan was arrested for fraudulently acquiring a passport for him and his wife. We also found the same news was published in Telangana Today.