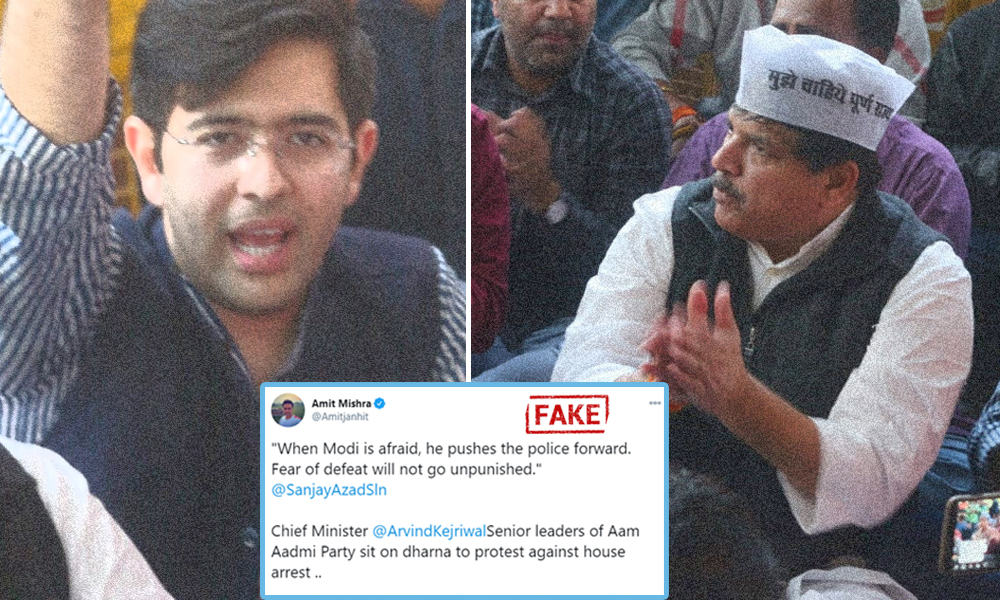 An old video of protest outside Election Commission's office in Delhi shared with misleading claims of AAP protesting outside CM Arvind Kejriwal's residence after his house arrest.

The Aam Aadmi Party accused the Central government of putting the Chief Minister of Delhi, Arvind Kejriwal, under house arrest on December 8, 2020, a day after he went to meet the protesting farmers against the Centre's new farm-laws.

According to a tweet by the AAP, Delhi Police put CM Kejriwal under house arrest ever since he visited the farmers' at Singhu border on December 7.

In context to the house arrest of Kejriwal, a video is viral on social media in which Sanjay Singh, Manish Sisodia, Raghav Chadhdha and other AAP party members are sitting on a protest and sloganeering, "जब जब मोदी डरता है पुलिस को आगे करता है,जब जब BJP डरती है पुलिस को आगे करती है, हार के डर से गुंडागर्दी नहीं चलेगी नहीं चलेगी." (Which translates in English as, "Whenever Modi is scared he puts police forward, whenever BJP feels scared they put police forward, we won't tolerate hooliganism caused due to their fear of losing"). Many people on social media are sharing the video with the context that the senior leaders of AAP party are protesting against the Modi government after Arvind Kejriwal is claimed to be under house arrest.

The viral video of senior leaders of AAP protesting against the government is in the backdrop of house arrest of Delhi CM Arvind Kejriwal.

A google search with the keyword, 'जब जब मोदी डरता है पुलिस को आगे करता है', we found the same image was published on a YouTube channel, Pal Pal News on March 16, 2019. Hence, the video is old and unrelated to the house arrest of Kejriwal.

Also, in the viral video, no one is wearing a mask which is essential during the ongoing coronavirus pandemic.

On speaking to Editor-in-Chief of Pal Pal News, Khusboo Akhtar, she said, it is an old video of 2019 when leaders of Aam Aadmi Party were protesting outside the Election Commission's office in Delhi.

A report published by The Indian Express on March 16, 2019, said that AAP's leaders were protesting outside the election commission's office against the raids done by Delhi Police at the party's call centres hired to inform people that their names had been deleted from the electoral rolls. The story has the same thumbnail as seen in the video clip.

The photos were also tweeted by AAP on March 15, 2019. This clearly implies that these are from an old protest.

Manish Sisodia along with other party members did a sit-in protest against the alleged house arrest of Arvind Kejriwal outside his house but the viral video is unrelated to it.

Hence, an old video of AAP leaders protesting outside the Election Commission's office has been revived and shared with the misleading context of them protesting against Arvind Kejriwal's house arrest.