The Logical Indian Fact Check team investigates the claim that ‘Argentina is Doing it’ WhatsApp video will hack your phone in 10 seconds on opening it. A WhatsApp Forward warns people to not open a video file titled 'Argentina is doing it'.

The forward says that on opening this video the user's phone will get hacked in 10 seconds. The video is apparently about Argentina flattening the COVID-19 curve.

The information in the forward is attributed to CNN.

"They are going to start circulating a video on WhatsApp that shows how the Covid19 curve is flattening in Argentina. The file is called "Argentina is doing it", do not open it or see it, it hacks your phone in 10 seconds and it cannot be stopped in any way. Pass the information on to your family and friends. Now they also said it on CNN," reads the message.

In another form, the message reads, "There is a video circulating on WhatsApp that shows how the Covid19 curve is flattening in Argentina. The file is called "Argentina is doing it", do NOT open it or see it, it hacks your phone in 10 seconds and it cannot be stopped in any way."

The claim has been shared several times on Twitter. The Logical Indian received a request on WhatsApp Fact Check no. to verify the forward.

'Argentina is Doing it' WhatsApp video will hack your phone in 10 seconds on opening it.

The claim is false. No such report on the apparent harmful video by CNN was found and there's no link to the CNN News report in which there's a warning about the hacking attack.

Blair Cofield, a CNN spokesperson, told Snopes that the message is wrongly attributed to CNN.

"This is false. There is nothing on CNN platforms with that message," he said.

Further, no such mechanism of hacking someone's phone to remove or steal the recipients' private information, as mentioned in the warning message was found.

According to WhatsApp, unsolicited messages from unauthorized third parties come in different forms such as spam, hoax and phishing messages. These messages are sent with the intention of deceiving the user and prompting them to act in a certain way.

WhatsApp lists the following characteristics of a hoax message:

(1) The message content includes instructions to forward the message. The viral forward does ask the user to forward it to other people.

(3) The message content includes a reward or gift from WhatsApp or another person.

(4) The sender claims to be affiliated with WhatsApp. In this case, the message is attributed to CNN, which is a media giant, to make it more credible.

Below is a comparison of the viral forward which makes it clear as to why it is a hoax: 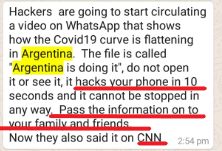 Also, the message does not mention which mobile operating system the malware runs on.

WhatsApp advises users who receive these messages to block the sender, disregard the message and delete it.

Almost 3 years ago, a similar message was doing the rounds which mentioned a video named 'Martinelli'. The rest of the message was the same.

Back then the Spanish police officials had debunked it as a hoax.

Claim Review :  ‘Argentina is Doing it’ WhatsApp video will hack your phone in 10 seconds on opening it.
Claimed By :  Social Media posts
Fact Check :  False
Suggest a correction