The message has been signed off by a Dr Anjali Mathur, Chairman and CMO at Indo American Hospital in South Dakota (US).

The same message has been viral in past as well. 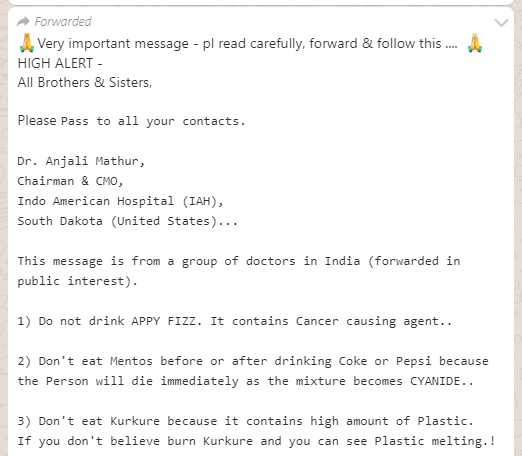 Please ```Pass to all your contacts.

This message is from a group of... https://t.co/LPiBuJnWsY

Please Pass to all your contacts.

Appy Fizz causes cancer, eating Mentos after Coca-Cola/Pepsi makes cyanide in your stomach and Kurkure has plastic in it.

Does Apply Fizz Cause Cancer?

According to, Foodnet, an Indian food safety site, Appy Fizz is a carbonated soda.

The Parle Appy fizz contains high amount of sugar - 21 gm in just 160 ml of the drink - which is harmful to the diabetics, however, there is nothing in the ingredients that suggest possible cancer.

Further, a Myth-busting site HoaxorFact had listed down their ingredients back in 2012, when the same hoax was doing the rounds.

None of these ingredients stood out as a carcinogen.

"Since the ingredients and chemicals used in this fizzy drink have not been disclosed – much like with Pepsi and Coca-Cola where the ingredients remain a mystery – it is very difficult to say if there is a carcinogenic agent or not, " Quint quoted Dr Ashwini Setya, senior gastroenterologist at Max Hospital as saying.

Cyanide Is Produced When Mentos Mixes With Coke?

This claim is not true. On mixing Pepsi (or Coke) with Mentos, bubbles start to form and an eruption occurs and consuming the two together might lead to a stomach upset. However, no credible reports could be found that says that it could cause death or serious injury.

The candy reacts with the carbon dioxide in the cola to create a lot of fizz.

"If you drop a pack of Mentos into a bottle of Diet Coke, you get this huge fountain of spray and Diet Coke foam coming out," Tonya Coffey, a physicist at Appalachian State University in Boone, North Carolina was quoted by Newscientist as saying.

"This was a good project for my students to study because there was still some mystery to it," she added.

When a Mentos is dropped into a fresh bottle of Diet Coke, a jet of Coke whooshes out of the bottle's mouth and can reach a height of 10 metres.

According to the investigation in a 2006 edition of the Discovery Channel programme Mythbusters, the chemicals responsible for the reaction are gum arabic and gelatine in the sweets, and caffeine, potassium benzoate and aspartame in the Coke.

Is Kurkure Made Of Plastic?

This too is a recurring hoax.

FSSAI has informed consumers that the "rumours on plastic cabbage, plastic kurkure, plastic rice and plastic egg are hoax.

FSSAI has also raised the issue with Ministry of Electronics and IT. Perpetrators to be booked, who spread such fake news. Visit https://t.co/ghvnHEbF1d

Back in June 2018, Livemint reported that through an interim order, the Delhi high court had directed social media platforms to remove or block access to the website links and posts that contained such allegations surrounding Kukure.

The Court order had been issued on 1 June 2018, based on a civil suit filed by PepsiCo India Holdings Pvt Ltd earlier which owns Kurkure.

Following the top court order, the social media companies such as Facebook, Twitter and Instagram deleted hundreds of posts alleging that Kurkure corn puff, a snack sold by American food and beverage maker PepsiCo Inc., contains plastic. Youtube too had also deleted hundreds of such videos.

"Fake news suggesting that Kurkure has plastic in it has adversely affected brand's reputation. Due to such fake and defamatory content circulating on the social media, PepsiCo India was constrained to move the Hon'ble Delhi High Court…this step has been taken to protect brand equity, a matter that we take very seriously at PepsiCo," Quartz quoted a PepsiCo spokesperson as saying two years ago.

On searching for an Indo American Hospital in South Dakota no result came up. However, hospitals with similar names are located in several places in India.

Below is a screenshot of Google Maps with these hospitals marked.