Some reports claimed that the Prime Minister inaugurated an already open All India Institute of Ayurveda. How true is this claim? Here is a Fact Check.

The Prime Minister recently dedicated to the nation, the All India Institute of Ayurveda (AIIA) in New Delhi’s Sarita Vihar. Narendra Modi’s personal website and the BJP’s official twitter handle reported this as the inauguration of the first ever AIIA.

Today, on National Ayurveda Day, delighted to have dedicated the All India Institute of Ayurveda to the nation. pic.twitter.com/UygY6NkrZg

The proposal to set up AIIA dates back to 2005

The reference to AIIA was found as way back as 2005 in the Lok Sabha records. In response to a question in the Lok Sabha in 2005, the then Minister of State for Health & Family Welfare Panabaka Lakshmi said that the proposal was for setting up a National Ayurveda Hospital as a Joint Venture project initially, but was later revised to establish it entirely in the Govt. sector as the AIIA with PG teaching and state-of-art research facilities. She also said that the land allotted by Delhi Development Authority (DDA) was inadequate and that additional land was sought. The answer even mentioned that the payment of lease for 11 acres was made in February 2005.

Cabinet Approval to AIIA in 2008

The Union Cabinet gave its approval to setting up of AIIA in January 2008 as per a press release of the government.

In February 2008, the then Minister of State for Health & Family Welfare Panabaka Lakshmi said that the AIIA will be a 200 bed research and referral hospital for facilitating clinical research in response to a question in the Lok Sabha. She also said that the AIIA would be fully functional by the end of XI Five Year Plan, i.e., by March, 2012. According to the response, the AIIA when fully functional will treat about 250-300 O.P.D. patients daily. The same thing was also reiterated in the Rajya Sabha later during that year.

The AIIA as planned initially was not complete by 2012. But, a temporary Out Patient (OPD) block of AIIA was built in August 2010 with pre-fabricated material for running OPD services. The OPD block was opened in October 2010 by the then Minister of State for Health & Family Welfare. This was mentioned in a press release by the government and the various annual reports of Department of AYUSH. 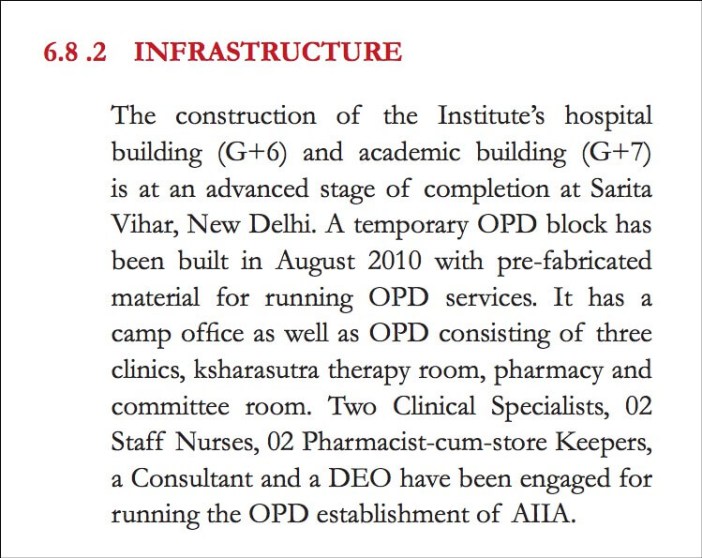 AIIA was not completed by 2012 as planned

The initial estimated cost for establishing AIIA during the 11th five-year plan period (2007 -2012) was Rs 155 crore (Rs 134 crore capital cost and the remaining recurring expenditure). This was noted in an answer given by the government in the Lok Sabha in 2008. The annual reports and the various budget documents make it clear that the construction was not complete by 2012 as planned. As per the budget documents, only Rs 114.12 crore was allocated for AIIA between 2008-09 and 2011-12 and the actual expenditure was only Rs 74.24 crore during the same period. The total expenditure on AIIA till December 2016 was close to Rs 200 crore and more than 80% of this expenditure (Rs 168 crore) was made during the UPA tenure (by 2013-14).

Construction of AIIA completed during 2016-17

The 2016-17 annual report of the Department of AYUSH notes that the construction of AIIA was complete, but the construction agency had not handed over the building to the government. It also notes that OPD facility (opened in 2010) in all specialties of Ayurveda started operating from the new building during 2016-17. Eventually, the complete building as planned was inaugurated & dedicated to the nation by the Prime Minister recently. 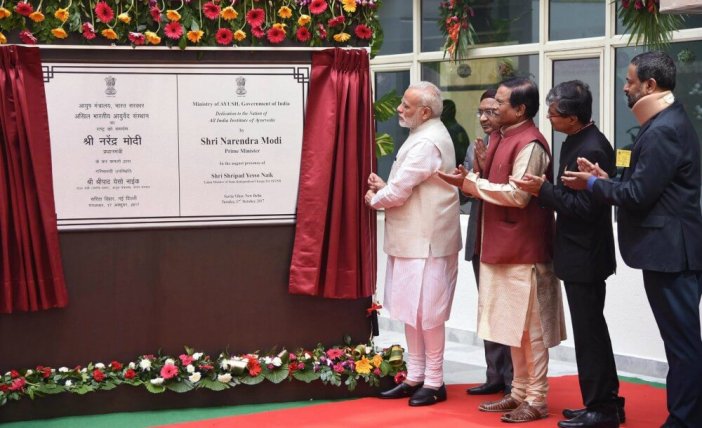 Claim Check: Did the PM inaugurate an already open building?

To put it simply, the Prime Minister did not open an already open building. He inaugurated the AIIA after the construction was complete, albeit after a delay of 5 years. The 2010 opening was a temporary block and did not constitute opening of the full building of the AIIA. It also has to be noted that the proposal for AIIA was floated & approval was given during the UPA tenure. Further, bulk of construction & expenditure was during the UPA’s tenure. The NDA government on its part gave a tender notice for second phase construction of AIIA in February 2017.