A video is getting viral on social media, in which a man claiming to be Shiv Sena leader Aaditya Thackeray confesses to killing actor Sushant Singh Rajput. The Logical Indian fact check team investigates the video.

A video is getting viral on social media, in which a man claiming to be Shiv Sena leader Aaditya Thackeray confesses to killing actor Sushant Singh Rajput. It is a video of over two minutes, where the man in the image is boasting about his power and position, and how he being the Cabinet Minister and son of Maharashtra Chief minister can do whatever he wants. The man can also be seen bragging about his authority not just over the state police but also over the Bollywood, doctors, CBI etc.

The video has been shared in many Facebook groups. Another Facebook page, Gladly talk also shared the video with the caption, "Here is the real murderer of Sushant Singh Rajput who has accepted his crime.'

Facebook page Ram Rajya shared the video on October 2, 2020, and asked his users to share it more so that people can know the reality. 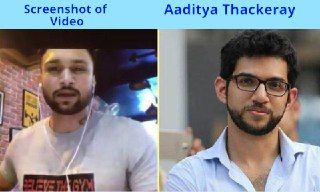 As per media reports, the man in the viral video and his father Mahendra Choudhary were arrested by Mumbai Police from his house in Faridabad. The video of Saahil Choudhary first appeared on a Facebook page 'Justice for humanity'. Saahil's arrest was followed by a Twitter trend with the hashtag #ReleaseSaahilChoudharyNow seeking the release of him. Going through the Instagram profile of Saahil Chaudhary, many posts of him seeking justice for Sushant Singh Rajput was found. One of his videos also went viral where he tried to recreate Sushant's suicide scene and gave reasons for why his death was a murder.

In Rajput's case, AIIMS has ruled out the murder theory and declared it as a case of suicide. Thus, the claim in the viral video is nothing more than a stunt for popularity.

The video was earlier fact-checked by altnews.

Also Read: Fact Check: Did BJP MP Kirron Kher Say "Rape Is A Part Of Indian Culture And It Can't Be Stopped"?