An infographic tweeted by the official BJP twitter account on April 14th made a claim that “Insolvency and Bankruptcy Code (IBC), 2016 has resulted in recovery of Rs. 4 lakh crore out of staggering Rs. 9 lakh crore of NPAs or bad loans given to the corporates under UPA government.”The incredible claim was faithfully tweeted by scores of unsuspecting followers. Other than the loyalists and the most gullible, it is a claim that most would find difficult to believe. Alt News digs deeper to get to the bottom of this tall claim.

The original tweet has now been deleted, a grab of which can be seen below. The Prime Minister’s website also carried this story in the media section and has now been deleted.

The figure of recovery of Rs. 4 lakh crore was traced to an Economic Times article on April 4thtitled “Rs 4 lakh crore NPAs have returned due to insolvency system: Official” which reported that “Less than half of the staggering Rs 9 lakh crore worth of non-performing assets (NPAs), or bad loans, accumulated by banks had returned due to the system set in place by the Insolvency and Bankruptcy Code (IBC), 2016”. The IANS report quoted Corporate Affairs Secretary Injeti Srinivas as the official who revealed this figure while speaking at the conference on Resolving Insolvency organised by industry chamber CII.

Like all pro-government stories, this news story was also circulated by PM Modi’s NaMo App and dutifully shared by BJP/NDA Ministers, MPs and MLAs on social media. The information was picked up by fake news website Postcard News which spiced it up further with the headline, “Massive crackdown by Modi government on NPAs”.

Surprisingly or may be not so surprising because of their political leanings, many including CAs, self-professed slayers of hoaxes and promoters of The True Picture, an alleged fact checking website promoted by Union ministers fell for these figures. “NPA by Congress: 9 lakh crore, recovery by Modi: 4 lakh crore” and “44.44% of outstanding NPAs of 9 Lakh Crores have returned” due to the recently launched insolvency system sounded entirely believable to them.

This is a fake news. Waiver = Don't pay bank, govt pays. Typically given to farmers.

No corporate got waiver. Write off is only for clean books. https://t.co/g1hJhu0pMR

Rs 4 lakh crore NPAs have returned due to insolvency system says corporate affairs Secretary. The amount is 44.44% of outstanding NPAs of 9 Lakh Crore. btw many more will happen in Next two quarters. https://t.co/YIxeXuXmZL

After the news did rounds of Postcard news and right-wing handles, it was shared by BJP without checking with their own government sources about the accuracy of the data.

RBI data on recovery of NPAs however tells a different story. According to RBI data presented by Minister of State for Finance Shiv Pratap Shukla in response to a query in Rajya Sabha, over the last four years, the public sector banks recovered only Rs 29,343 crore out of Rs 2.73 lakh crore of bad loans that were written off. 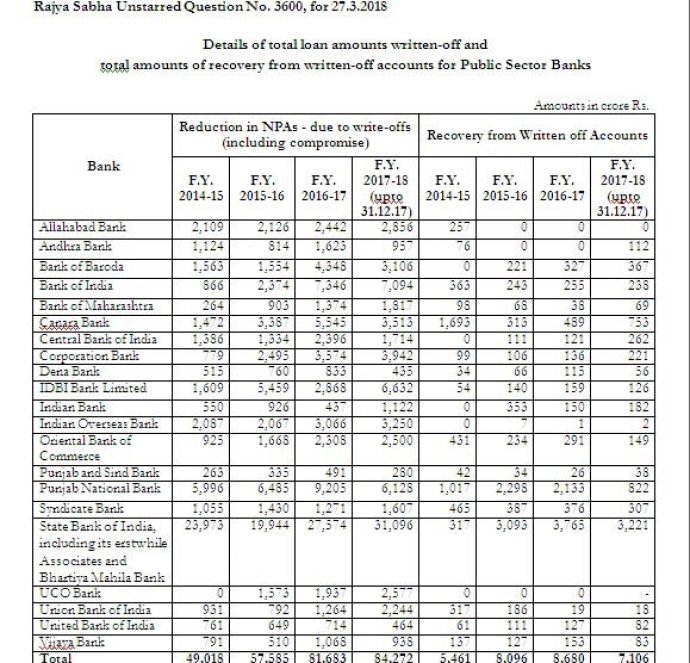 Even though banks have failed to recover the bulk of bad loans, it is important to keep in mind the important distinction between loan write-off and loan waiver. Many on social media have been confused about this and have projected the loan write-off as loan waiver by the banks. A write-off does not mean that the borrower has been given a clean chit. There will be ongoing attempts to recover the balance, including through the system put in place by the Insolvency and Bankruptcy Code (IBC). The final result of recovery efforts remains to be seen. For now the recovery rate has been 10.77%, which means that more than 89 per cent of the non-performing assets (NPA) written off by state-owned banks during the four-year period could not be recovered during this period.

Clarification from the Ministry of Corporate Affairs

Alt News contacted, Corporate Affairs Secretary Injeti Srinivas to get a clarification from him about the discrepancy between the RBI data and what he was quoted by media as saying. He told Alt News in a written response that “I have been misquoted in the media on this matter. What I stated was that, nearly 50% of the NPAs have got referred to the system put in place under IBC.” He further clarified that the basis of the 4 lakh crore figure by explaining that “at present cases involving Rs 3.30 lakh crore have been referred to NCLT. In addition to this claims amounting to Rs. 83,000 crore have got settled before admission. Together it exceeds 4 lakh crores”.

The tall claim made by BJP via its tweet seems to be an error and it was deleted once the error was realized. The so-called fact checkers of the right-wing who have been waxing eloquent about the difference between loan write-off and loan waiver fell for such an obviously false claim. They believed that Modi government has magically recovered 4 lakh crore out of the total NPA of 9 lakh crore and shared the false information widely on social media. The source of misinformation was The Economic Times article that published the IANS report without basic fact-checking. Doubts were raised by Indian Express and Firstpost both of which pointed out the inconsistency with the RBI data. The issue has now been clarified by the Secretary, Corporate Affairs that 4 lakh crore is the amount referred to the system put in place under IBC and NOT the amount of NPAs recovered.