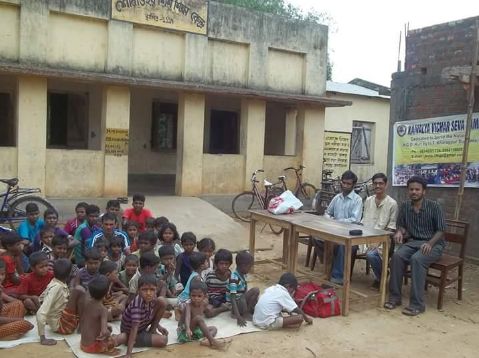 Education is the most powerful weapon which we can use to change the world. There are thousands of people who receive an education from the best colleges in the country, but only a few share their erudition for a greater purpose. One such individual is Vishal Singh, an IIT Kharagpur post-grad in Food Process Engineering, who quit his high-paying job to educate the less fortunate youth of our nation.

Seeing the poor condition of municipal areas near the IIT Kharagpur campus, Vishal decided to do something about it. He started his work from Soladahar and Kusalachatti – two nearby villages, where child labourers were common. With the help of his friends, Vishal spoke to village households who revealed the necessity for their children to work due to low income of the families.

Since the villagers did not have enough money to support their children’s education, Vishal and his friends started evening schools in both the villages. Within three months, the schools had a strength of 60-70 students. Following which Vishal spoke to the department head of Rural Development Sector, IIT Kharagpur and with help from his college, solar lights and benches were installed in the schools. After achieving success in evening schools, he co-founded the NGO – Kaivalya Vichar Seva Samiti in Uttar Pradesh in 2012. The NGO is run by IIT Kharagpur and Banaras University students. With help from volunteers from Aligargh and Kharagpur, the NGO started different campaigns on education (Siksha-Daanam ), food distribution (Anna-Daanam) and clothes distribution (Vastra-Daanam). Five years since its incorporation, it operates 5 branches across the nation and has expanded to villages in West Bengal and Odisha. Apart from education, the NGO also offers programs on social welfare, livelihood, sustainable and organic agriculture, and agri-allied. KVVS has collaborated with existing primary schools that provided it with its list of students, which in turn was sent to IIT Kharagpur alumni settled abroad. With the help of this initiative, many students received education and livelihood sponsorships. Currently, around 1700 students have received benefits from the initiative.

In 2016, KVVS started promoting organic farming to benefit farmers
With the help of its staff and volunteers, KVVS trained farmers on organic farming, zero-budget farming, and pesticides made from cow dung and urine. In one year, 3000 farmers received direct training from KVVS.

The NGO also expanded its operations to assist the Lodha tribe of Mayurbhanj District, Odisha. This is a vulnerable tribal group, close to extinction. Speaking to The Logical Indian, Vishal said, “KVVS protects the tribe’s livelihood through its objective – reinstate the glory of the villages by providing livelihood sources to rural and tribal communities, thereby ending migration from rural to urban areas.” To encourage them to stay in their native land, KKVS offers the tribe Rs 1 lakh profit per acre of land (Rs 8000 per month). For this purpose, the NGO has started organic farming in 360 acres of land in Mayurbhanj district, in agreement with the government that the land belongs to the Lodha tribe and is being used to sustain their lives. KVVS has successfully trained 1500 Lodha tribe farmers in organic farming and is helping them commercialise their agricultural produce. Vishal believes that the future of India lies in the education of our children
After his M.Tech from IIT Kharagpur, Vishal was working in the R&D department of SAIL in Lucknow, post which he worked as the Head of department of Agricultural Engineering, Centurion University of Technology and Management, Odisha. However, he quit his job as HOD and has been working full time with KVVS.

Till date, KVVS has educated, trained, and distributed school bags, school uniforms, clothes and food to more than 8000 children of tribal and rural regions of India. Besides this, the NGO is facilitating 4 orphan centres, 6 primary schools and covering more than 15 villages in Uttar Pradesh, Odisha, Jharkhand and West Bengal.

Vishal strongly believes that India can gain prosperity if future generations of our country are educated and skill-oriented. As a message to the educated masses of India, he appealed, “Come forward and serve the country for making each and every deprived child educated and self-dependent.”

The Logical Indian appreciates Vishal’s efforts towards educating the Indian society and we hope that he continues to spread his good work and inspire millions.