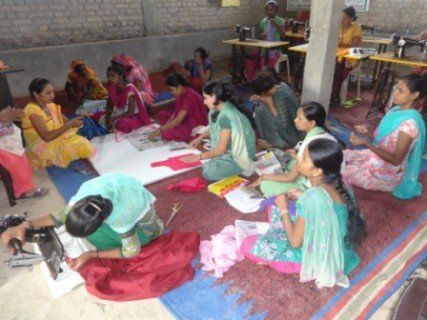 Sajoi, known for its handlooms, is located a few kilometres from Varanasi. Most of the families here lived in abject poverty where even earning a daily meal was a challenge. This is why children would help the families earn. The Logical Indian reached out to know more about the girls who were disturbed about the conditions and decided to change the situation. We spoke to the Dr Rajnikant, Founding Member of the Human Welfare Association. HWA leads a lot of projects in Varanasi, and Dr Rajnikant described the journey of these girls. Dr Rajnikant said, “Sajoi was a weaver-dominated area. With time the situation was deteriorating, and education was not on their priority. For them, more children meant more work. Only 10% of the villagers were educated, and child labour was rising. But the picture has completely changed now. This has been possible because of the selfless efforts by Rubina, Tabassum and Taranum.”

These girls were the first women from the village to pass senior secondary. After which, their quest to bring a change in their village started. This was not a cakewalk and required constant effort. The villagers completely opposed and abused them. They were ordered to vacate the place where they ran a small school. Their hopes did not deter, and they conducted classes from their homes. The girls taught women and educated them about the importance of sending their children to school. The trio started a small training centre so that the parents agreed to let their daughters attend school.

When the girls from the village came to learn stitching and sewing, they were also taught maths. The families opposed this method of teaching, but the girls convinced them saying they needed to teach maths for measurement and calculations. With their grit and efforts, the girls completely changed the village.

Proud of their achievement, Dr Rajnikant said, “They have convinced parents to send children to their school. 475 students have now been admitted and are availing mainstream education. Tabassum and Taranum both got married and moved to another village nearby, and Rubina spearheaded the school alone. And under her guidance, 75 girls have completed their studies. Now 90% of the children in the village go to school.” Parents have now started to show interest in education. The ladies no longer put thumb impression on papers. They have started to sign their names. Apart from imparting education, the trio with the help of Human Welfare Association have started to give vocational training in knitting and crafts.

The girls are now finishing their graduation alongside teaching. They are also doing information technology training as they see huge scope in this sector.

The Logical Indian salutes the efforts of Rubina, Tarannum and Tabassum in transforming their village.