'From Rs 50,000 Per Annum To An Income Of Rs 3 Lakh': This Couple Is Transforming Lives Of Villagers In Maharashtra 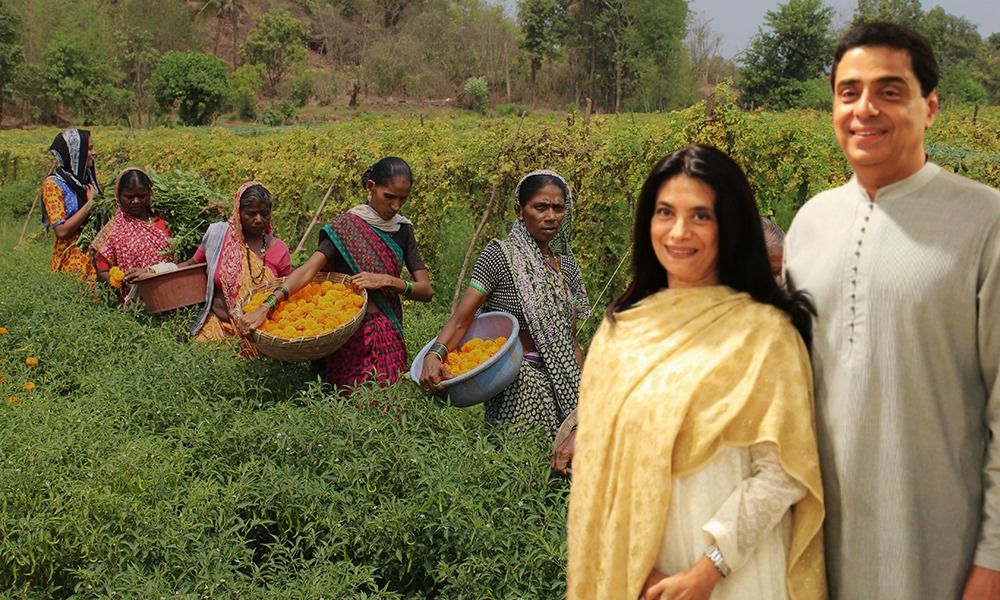 An experienced 65-year-old farmer, Arjun Dagadu, hailing from a remote village in Maharashtra, was merely earning ₹50,000 annually with his agricultural production. He only cultivated pulses and paddy in his 2-acre land and adopted traditional farming techniques. Although, with several exposure visits and training by Swades Foundation on advanced agricultural production, he transformed his fate.

He decided to add another acre of land and started cultivating watermelons as well as other vegetables, along with his brother. Eventually, he took more land on lease and made an annual net profit of ₹3,00,000. He motivated 16 other farmers in his own village to uptake farming and guided them in becoming self-reliant. At the heart of many such transformational journeys lies the effort of Swades Foundation which has been efficiently working to impact rural lives and acting as a harbinger of change.

Taking the holistic development of rural lives into account, Swades Foundation was started with the single-minded focus of rural empowerment. It was founded by eminent personalities known for their entrepreneurial ventures, Zarina and Ronnie Screwvala, with the vision of impacting rural India. Rather than just focusing on one area, it works on four major verticals - Health & Nutrition, Education, Water & Sanitation and Economic Development to bring holistic change.

Encapsulating rural regions of Maharashtra, it currently works in seven blocks (Mangaon, Mahasla, Mahad, Poladpur, Tala, Shrivardhan & Sudhagad) of Raigad district. With the goal of economic development, it aims to increase the income of rural households critically through two diverse sources – farm-based and off-farm/non-farm based. It builds an entire ecosystem through which they get opportunities to change their own lives as well as provides them access to credit. The beneficiaries not just empower themselves but also set an example for others to follow.

One of the beneficiaries of Swades Foundation

In a conversation with The Logical Indian, Ronnie Screwvala shares, "Swades Foundation, focuses on rural development and our strategy to empower communities and exit will fail, if we do not focus on their economic development. For us, it is not just about bringing families out of poverty but ensuring that the income is sustained and progresses. Without economic development, everything that we do in Health, Education, and Water & Sanitation will fail to sustain its impact as well."

Since its inception, Swades Foundation has given training to thousands of farmers and helped them adopt suitable practices, farming techniques required to aggravate their production. Convincing them for training has not been an easy task. However, with a strong team being engaged at the grass-root level as well as industry experts, it has been able to turn the dream into reality. It has over 700 community volunteers along with 300 plus staff working to ensure a robust execution. In fact, the foundation brings multiple stakeholders together - experts, government, donors and others, to solve issues on hand.

Training given to Farmers by Swades foundation for better agricultural practices

Talking about the problems faced in its operations, Zarina Screwvala shares with The Logical Indian, "The biggest challenge is always the mindset – inculcating the 'can do' attitude. Of course, this is not an overnight process and requires sustained engagement efforts. Participation in training is another challenge. Taking them out of their routine and soliciting their active engagement is definitely a problem which we have observed. In most cases, we provide training to the community as we find it more impactful. Another aspect related to training is that it has to be ongoing, which is why we create community volunteers as master trainers and resource persons to ensure sustainability."

Students also being impacted with the programmes of Swades Foundation

By shaping the dreams of rural farmers, the foundation has resulted in bringing a difference in other areas of their life as well. With increased confidence by growth in their income, they could take control over their lives and also provide their families with a better standard of living. The foundation works closely with the government in order to bring irreversible change. It believes that a collaborative model with government, corporate, various NGOs and multiple associated partners would help them to bring change on a larger scale. The vision of impacting 1 million lives in the upcoming 5 years could only be possible with such a unique model.

"We work very closely with the state and district administration and ensure that our work compliments. We have MOUs with the state government to work in schools and for health interventions. Also, we've signed a 'letter of intent' with the state government to create 1000 dream villages across Maharashtra and the process is underway to create the first few in a year or so. In our journey, we have met many inspiring government officers who are doing wonderful work in the most difficult circumstances. Why reinvent the wheel when together we can do a lot more," says Zarina Screwvala while speaking with The Logical Indian.

Critical to the success of their development model, the foundation is creating Village Development Committees (VDC) in all of the 2,500 hamlets which they work with to ensure sustainability in the long run. These committees are trained and empowered to take on the mandate of village development from Swades Foundation. So far, it has created over 1,000 VDCs and it continues to closely work and handhold them so that they are active, empowered and functional.

Apart from this, it has also been working on the education front to enable a better learning environment by working with schools, teachers, introducing e-learning and providing them with scholarships. It is also striving to provide primary healthcare facilities in rural areas with its intervention and linking government bodies. At the core, it believes that the economic development of the rural population is required for the inclusive growth of our country. The Logical Indian salutes the efforts of the Swades Foundation for impacting rural India with its unique model and working towards empowering villages.