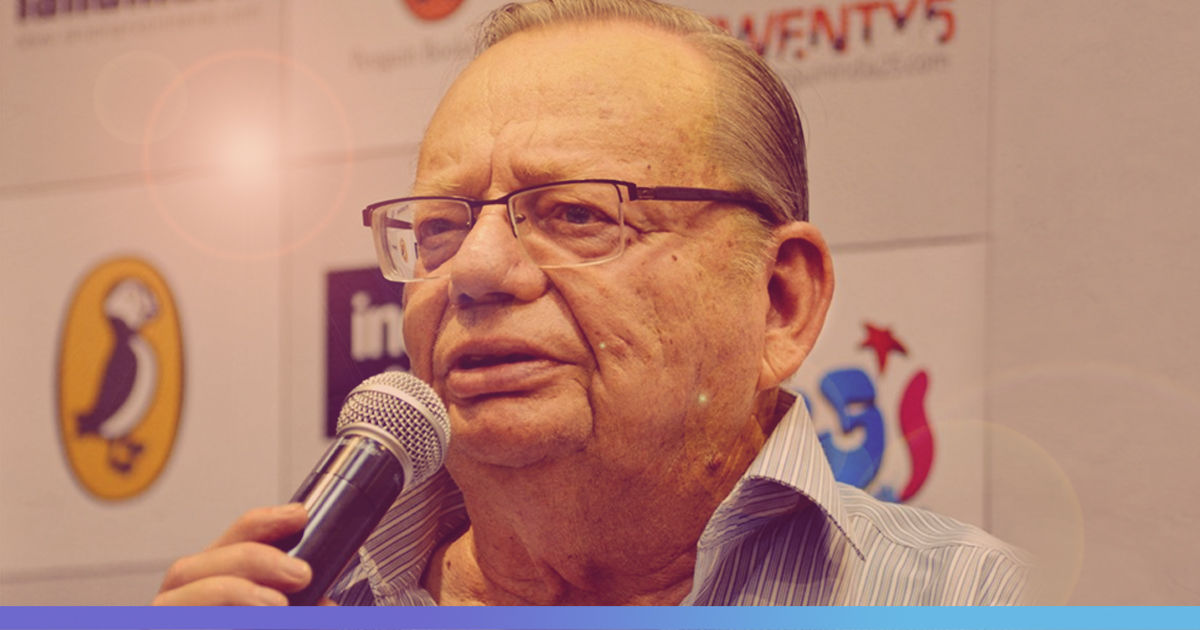 "A Writer Without Regrets": Ruskin Bond Opens Up About The Secrets Of His Literary World

“It is always the same with mountains. Once you have lived with them for any length of time, you belong to them. There is no escape.”

He lives in a house atop the hills in Mussoorie. His window opens out on the sky and the clouds. It’s interesting, he says, to see the clouds and hear the birds chirping.

He has lived in the hills for so long that most of his stories are set in the hills. Nature makes him feel at peace.

“I have been writing for as long as I can remember,” he tells The Logical Indian.

In May of this year, he released his new book ‘Coming Round the Mountain’, which is the third in his memoir series and details various episodes from his childhood.

“I have been writing for 65 years or more now and I wouldn’t say I need inspiration all the time,” he smiles. “It’s just that I enjoy writing and sometimes I like looking back and writing about my boyhood days. The longer you live, the more you have to write about.”

At a recent event, Bond said that there may soon be more writers than readers in India.

“Well, I did say that at an event, but I still hope there are a lot of readers, a lot of people who find pleasure in books. But writers are catching up. If regular publishers do not want to publish them, they often self-publish their books. But let people write, it’s a good practice, although it does not mean that their books will be widely read,” Bond says.

“Going back to my boyhood, as I often love to do, even then very few of us were genuine readers. We did not have televisions or the internet, all those things that we consider diversions today, but in a class of about 30 boys, only two or three of us were book lovers. The trend continues,” Bond says.

If one loves to read, he believes, nothing can really be a distraction. The love for books comes from within. It develops over the years.

“Reading has always been a minority pastime, I think. Only a chosen few become readers for life, and let’s say we are the lucky ones.”

“But reading is extremely important for me. If I was locked up in a prison cell and not allowed any books, I would certainly go crazy within a few days,” he smiles. “I read a little every day, I write a little every day.”

Although scores of people of this generation are into e-books, Bond believes that printed books are here to stay.

“I believe only a few people use e-books today. The convenience of a printed book cannot be overlooked. It is something book lovers like to possess as their own. It gives us a sense of belonging,” he says.

Bond had a lot of publishers in his earlier time, a few of who seem to have ‘vanished’.

“You know, it’s not easy selling books. After all they are not eatables or absolute necessities,” he says. “It may be a necessity for you and me, but not for everybody. The best publishers are those who themselves like books.”

When Bond started writing professionally, there weren’t many publishers. Most of them were academic publishers who publish school and college books. He would write short stories and sell them to magazines, mostly.

“There are very good, successful publishers like Rupa Publications, which have published a lot of my books. Penguin and HarperCollins too are doing very well. Although we say that there aren’t many readers, but there must be quite a few. Otherwise, how are so many books selling each day?”

Bond’s Most Loved: ‘The Night Train At Deoli’

The mountains, hills and nature as a whole play a crucial role in developing the nostalgia that wraps most of Bond’s stories.

One of his earliest stories, Bond wrote ‘The Night Train at Deoli’ when he was just 21. In the book, the young narrator tells us that every summer, he would go to Dehra to spend the vacation with his grandmother. On the way, the train would always stop at a small, lonely station, Deoli, amidst the jungle.

No one would ever get on or off the train on this platform. On one such journey, he meets a girl selling baskets on the station. Her dark, troubled eyes attract him. On all of his journeys, he would wait to see the girl.

One summer, he does not see the girl anymore and is overcome with a sense of foreboding. He learns that the girl had stopped coming to the station.

“I used to travel a lot in trains in those days, as did everybody. I remember always looking out the windows on my journeys. I must have seen this girl a couple of times, and I was always falling in love. So I wrote a story about her. The story had no ending and neither did the incident, but I believe that is what has appealed to my readers the most, just as it appealed to me,” he says.

A lot of Bond’s stories revolve around his happy, eccentric grandfather, who loves animals. Grandfather is one of Bond’s most intriguing and exciting characters.

Stories like A Tiger in the House and Grandfather’s Private Zoo have been favourites among the young and old alike.

When The Logical Indian asked Bond about this famous Grandfather, he had an interesting story to share.

“Let me share a little secret with you,” Bond smiled. “Although most of my readers think that I knew my grandfather, the truth is that I have never even seen him. In fact, both my grandfathers died before I was born. But my mother told me stories about him.”

“So I invented this imaginary grandfather and made him this uncommon man, colourful, good-humoured. Although a lot of my stories are based on real people, grandfather- perhaps the most loved, is someone I created.”

“I have been a reader since I was a kid. Luckily, in school, I was given the charge of the library, the keys to which I would always have. To escape things like morning physical training classes and homework, I would just slip into the library. It was a great escape for me and so I have always had a soft spot for libraries,” he says.

Bond says he has had different favourites in different time periods when it comes to books and authors.

“I have always loved authors like Somerset Maugham, P.G. Wodehouse, Agatha Christie and many others. Honestly, I would try reading everything. Take Charles Dickens for example. I have read all his works and am particularly inspired by David Copperfield, which I read when I was 12,” he says.

“I wanted to be like David and I ran away from home once. But I came back in a day or two, I did not have enough pocket money. David grew up to be a writer and so did I. I love the characters in the novel – Mr. Wickfield, Aunt Betsey Trotwood, Mr. Micawber, James Steerforth and so many others. They are all very lovable, memorable characters.”

Bond loves to be around books, to be surrounded by words that inspire. Reading is, obviously, an essential part of his life.

“India is so full of variety. So many climates, so many different kinds of flora and fauna throughout the country, from north to south. This is something you won’t get elsewhere. Every mile is different. There is never a dull moment,” he says.

Bond’s love for India and its diversity is what prompts him to set his stories on the Himalayas, painting pictures in a variety of colours. His love for the Indian culture, the languages and the people deeply inspires his stories.

“I prefer writing in black and white. I do not prefer typing because a pen and paper give me a sense of satisfaction.”

“I wish to write every day, but sometimes the odds are not in my favour. I will tell you what I was doing this morning – filing an income tax return. It’s not very interesting but I have to do it. After I am done with this, maybe I will start writing another story, perhaps a love story,” he smiles.

Bond says that he has often had kids coming to him and telling him that they want to become a writer but they do not like to read books.

“But to become a good writer, you need to be a good reader. The more you read, the more you learn and the better you write. It is only through the love of books that one becomes a serious writer,” he says.

“If you look at all the great writers, they were all avid readers when they were young. Reading is essential. I also believe that if you want to write, start with writing about your own surroundings and about people you know, rather than writing about a foreign country and people you don’t know. The output, in the first case, will always be better,” he says.

Bond comes to Cambridge Book Depot in Mussoorie every weekend to sign books for people who buy them. A lot of people, he says, say that although they don’t read much, they would like to read some of his stories.

“I have perhaps made a few readers then, and that makes me elated,” he says.

“I have been able to make a living by doing something I love the most. Today, there are so many of my stories that sell well and that people connect to and love. Life has been pretty decent to me. I am a writer without any regrets,” he says.

Through scores of his short stories and novellas, Ruskin Bond has immortalised literature for children and adults alike. A household literary name in India, he is an icon for all book lovers.

The Logical Indian salutes Ruskin Bond for his unparalleled contribution to Indian literature.