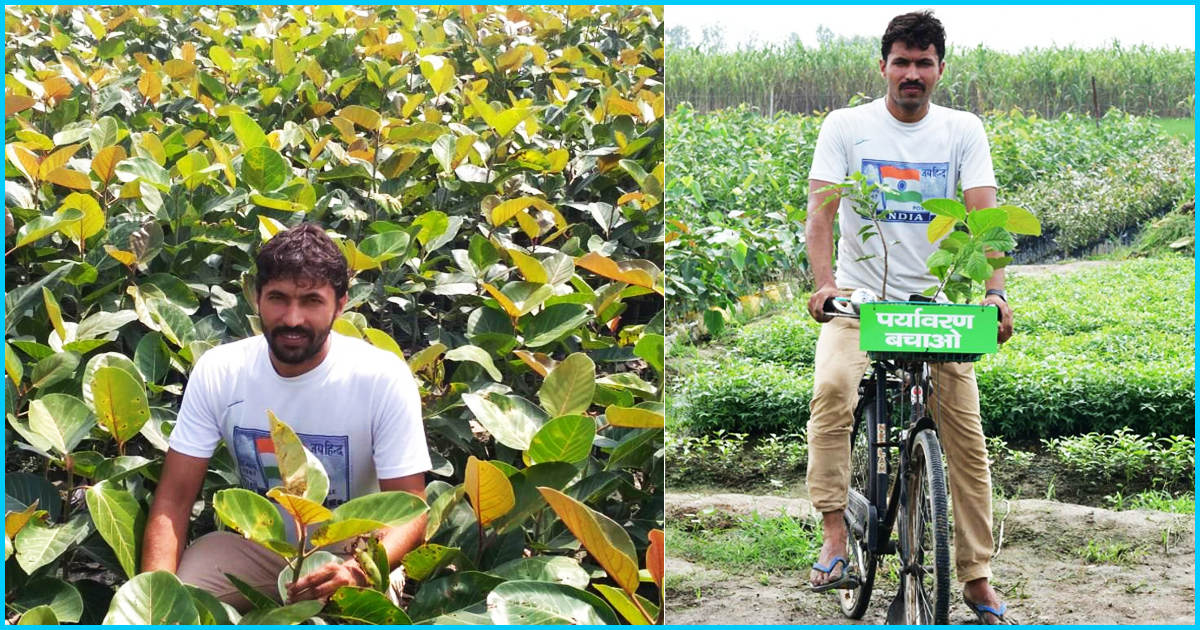 We all want to live in a place where every time we look out of the window, we see lush green trees bearing fruits like Mango, Guava, etc, dancing with the wind. However, with growing pollution and rapid urbanisation, that seems to be a distant dream. However, Sonepat’s police constable is not just dreaming about it but is also putting all his efforts to make his village a green glory. Devender Sura, a constable at Chandigarh police is popularly known as the “Tree-man” of Haryana’s Sonepat. For the last seven years, he has been planting trees in his as well as many other nearby districts in an aim to make these places greener and healthier to live in.

In 2011, Devendra had first gone to Chandigarh for his police training. The city, which is planned by the French architect Le Corbusier had mesmerised Devendra completely. He was amazed to see the city’s abundant greenery all over. He made up his mind to that Sonepat too is transformed into such place.

“Trees are a key to better life. If there are trees in the villages, the rains will automatically happen. Eventually, the animals and birds will also be attracted to the surrounding; basically, the place would become better,” said Devendra while talking to The Logical Indian.

Devendra has been a national level Kabaddi player. “As a player, I always wanted to contribute the most to my nation, that is why I got into the police, but during my training in Chandigarh, I saw how beautifully the city is planned, and also the fact that it was so green, I decided to do the same for my village,” he said.

In 2012, a year after his posting in Chandigarh, Devendra, a resident of Jhagsi village of Sonepat started to plant trees in the police line (Police colony). He first started to buy the plant from a local nursery but it soon started to reflect on his pocket, so he decided to buy the plants in bulk from farmers in the nearby village.

Soon the 30-year-old called for a plantation drive, “Pariyavaran Bachao Abhiyan” (Save Environment Abhiyan) because of his tireless efforts towards building a green village. “As soon as I started the drive, all my time was dedicated to it. I am placed in the security department, I have a 24-hour shift, and then I get 48-hour rest. In that rest time and on my offs I started to pay attention to my plantation drive,” he said.

His family did not like it initially. “I earn Rs 51,000, of which I save most of it for my plantation drive. My father who works as a security guard in State Bank Of India in Delhi takes care of the family with his salary and army pension. Initially, my family was against it as I was giving them any time and also any monetary help, but when I told them that I would continue to do this for rest of my life as this gives me a sense of happiness and makes me feel proud. He understood it, and now they also help me in my work,” he added.

He says that after planting the saplings in his village, he decided to move to the other areas as well. Moreover, buying plants in bulk from the farmers was also getting expensive. So he decided to grow plants on his own. “I took two-acre land on lease in a nearby village in Abhari village. I did not have that much money then so I took a loan for Rs 13 lakh. I stayed with some farmers for a few days and learnt how to actually grow a plant so that I would not have to buy them,” he added.

He claims that he has spent almost Rs 28-30 lakh till now on his entire Abhiyan (campaign). “Buying land is not the only expense because you can plant a sapling but, to take care of it is more difficult and requires more resources. Getting manure and water tank was also a big expense in all this, ” said Devendra.

Help from all corners

By this time, many villages came up to help him. According to Devendra, apart from the villagers, his seniors at the office also appreciated his contribution to the environment. He also told us that a villager gave him one acre of land close to his nursery in order to help him. Another villager took the responsibility to provide at least two water tank in a month for the nursery.

“I have 44,000 plants in my nursery and now I am not alone, many people volunteer to help me. Most of them are students. They can’t give me financial aid, but they help me in some or the other way,” he said.

When asked about what were the trees that he grew in his nursery he said, Pilkhan, Neem, Babul, Sisam, Peepal. “There are a lot of Pilkhan trees on Chandigarh streets. The French designer also chosse it because they grow very fast and that it why I am also using the same species for my village,” said Devendra. Once the sapling is big enough to be planted, the volunteers take them to the schools, colleges and other areas to be planted.

“I can’t afford to buy a vehicle, so I got a bullock-cart and I already have two cycles, one in my village and another one in Chandigarh. For travelling, I use my cycle, and for plants to get delivered, I use the bullock-cart. Now, the volunteers help me deliver the plants,” he added.

He says that he also goes to nearby states to make other people aware of his initiative. He says, he does not want monetary help but want more people to join hands for this initiative.

“I get at least one request daily for tree plantation on someone’s birthdays now,” he added.

“I will do it till my last breath”

Devendra’s initiative has now reached to 152 village Panchayats in Sonepat district apart from the main town. According to him, some 76,000 volunteers are associated with his Abhiyan. He says that he along with his team aim at educating people about the need of keeping the environment green and then they also constitute a “Pariyawahan Bachao Abhiyan Team”.

“This team help me in expanding my initiatives, I provide plants to these teams in different villages, and then they plant the saplings. I do not give my plants to just about anyone, but only to those who pledge that they will not just plant the trees but will also take care of them. I have made WhatsApp group to coordinate it better,” he said. This team include students, old and young men and women. Till now Devendra and his team have planted 1,33,000 trees.

While talking about Devendra’s future prospects, he says “This is not just my passion but is also my duty, it is my contribution to my nation and my mother nature.”

The Logical Indian wholeheartedly appreciates Devendra’s dedication and commitment to the cause.

Also Read: From 2-Acre Barren Land To Farm With More Than 700 Trees & Plants, Meet The One-Man Army From Mangaluru