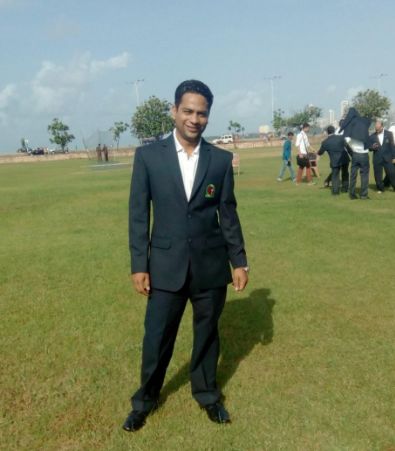 You have this one life. How do you want to spend it? Comfortably? Regrettably? Or Passionately?

While most of us are satisfied with comfort, this is precisely what separates us from the achievers – people who not only dream big, but put in all their sweat and blood to make it a reality.

One such individual is the 29-year-old athlete and cricketer, Mahendra Singh Raghuwanshi. On the evening of September 16th, 2007, Mahendra was traveling in a public bus from his hometown Mhow to Indore. At 7:45 PM, the bus with 45 passengers on-board collided with a jeep on NH3. Nine casualties were counted, including Mahendra. He was presumed dead because of grievous injuries on his body, and bleeding from head to toe. Half of his body was stuck under the bus, with an iron rod shoved inside his stomach. He spent two hours lying in that condition before people discovered that he was still alive.

Mahendra miraculously made a slight movement of his hand which helped him call for aid. He managed to dial his father’s number on the phone and asked people to not admit him in a government hospital. “Those few moments of courage – I owe it to my father”, said Mahendra.

Mahendra’s father was in the army and two months prior to his son’s accident, he was severely injured from five bullet wounds. “I thought to myself – if my dad can do it, so can I”, added Mahendra.

His treatment finally started at 1 AM in the morning when his pulse rate was down to 3. The normal heart rate for an adult ranges from 60 to 100 heart beats a minute.

Mahendra’s operation was successful, however, his right leg had to be amputated and he had permanently lost 30% of hearing of his right ear. He also received 22 stiches on his head and for 3 months post his operation, he had lost the ability to speak.

At the time of the accident, Mahendra was only 19. Like his father, he wanted to join the army but his injury did not allow him to pursue this goal. But, when there is a will, there is a way.

He never lost hope and with the help of his family and his friends Mukesh, Gautam and Neenaz he reinvigorated his passion in sports.
Since a young age, Mahendra had an inclination toward sports. He had participated in two national Kabaddi tournaments in school and was also a state-level football and cricket player. “It was extremely difficult for me initially – not only because of my physical disability, but the same people that I used to play with, now looked at me differently and doubted my game”, confided Mahendra. However, despite all odds he proved everyone wrong.

Mahendra is a left arm medium pace bowler and for two years he continued playing in local cricket tournaments and participated in several national marathons across the country.

In January 2015, he was selected to the Madhya Pradesh State Disabled Cricket Team, which later helped him make it to the Central Zone Disabled Cricket Team. That same year he was also selected to play for Team India in the Bangladesh tour which is organised every year by the Red Cross Society where five countries including India, Bangladesh, Pakistan, Afghanistan and England play 20-20 matches. Mahendra was a part of the 15-member team of India under the captainship of Darshan Singh while noted cricketer Suresh Kulkarni was the team’s coach. “Disabled cricket was started in India more than 3 decades ago by former international cricketer and team India captain Ajit Wadekar. But only a few people are aware of it”, said Mahendra. Talking to The Logical Indian, he also revealed the lack of government support for the sport and the financial difficulties faced by the players. Teams of other nations receive a higher level of professional support than their Indian counterpart. Players in India have to fend for themselves, with no support – financial or otherwise, from the BCCI or the government. “There was a massive difference between us and them, and that showed clearly in our lack of coordination”, added Mahendra.

Because players are underpaid in disabled cricket, people don’t opt for it as a career. For the Bangladesh tour, each player of the Indian cricket team was not paid more than Rs. 3000. They also had to finance their own practice, training and travel. To provide himself with monetary support, Mahendra has a full-time job and also works at an NGO.

Post his return from the tour, he made it in the Limca Book of Records for the longest motorcycling by a person on a prosthetic leg – 5331.5 kms in 17 days. Since September 2016, Mahendra decided to take up badminton professionally as the sport has more opportunity and scope. When asked how he manages training with a full-time job, Mahendra humbly replied that his passion for athletics has helped him push boundaries at each step. He travels almost 100 kms every day for work and goes for practice once he is back. “Doctors have advised me to not exert my body so much because it is unhealthy to wear prosthetics for long durations. It might cause injection”, said Mahendra. But there is no stopping this guy. He believes that passion for sports comes from the heart and it cannot be treated like a job. Mahendra wishes to represent India in Para-badminton for the 2018 Para Asian games and win gold for the country. His passion for sports and the drive to prove to the World that nothing is unachievable keep him going.

Mahendra is an inspiration for millions of people, especially the youth of our country. Our heartiest wishes are with him and we hope that he succeeds in bringing a medal for India.