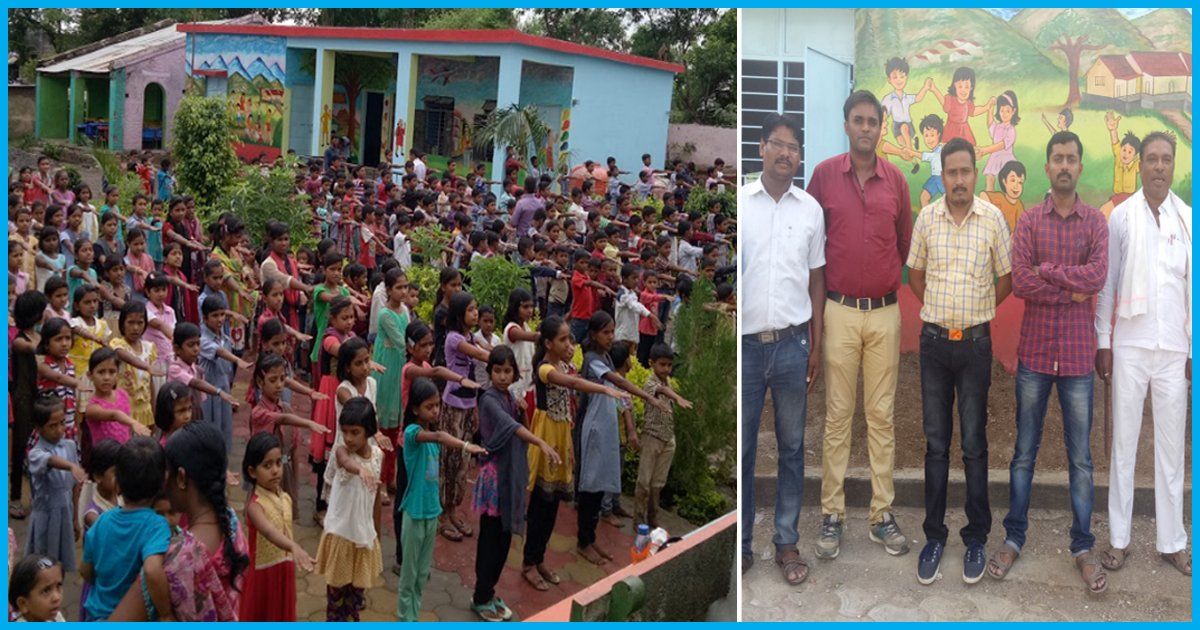 Come the month of September, the entire student community in India preps up for the ‘Teacher’s Day’ celebration in schools and in colleges. The birthday of Dr Sarvapalli Radhakrishnan is being celebrated all over India as Teacher’s Day. But one wonders how much of Dr Radhakrishnan’s legacy are we still holding on to when we are busy with the celebration part of the day.

The Indian tradition has always upheld the role of teachers in the lives of students. But with the increasing number of sexual harassment cases in schools, we are left wondering at the necessity and the importance of these celebrations.

The Logical Indian brings forth the story of one such dedicated teacher who has made it his life’s motto to better the lives of his students and impart the light of education to even the remotest of villagers. We had the opportunity of talking to Mr Narayan Garde, the headmaster of Nawli Zilla Parishad school in Risod taluka of Maharashtra’s Washim district. In an exclusive interview, he has spoken of the metamorphosis that he and his team of teachers have brought about in the erstwhile drab and dreary atmosphere of the school.

A teacher by profession, Narayan Garde was transferred to Nawli, a small village in Maharashtra in June 2016. After his transfer, Garde encountered the appalling state of the only school in the village where the medium of teaching was in Marathi. The parents, there used to think twice before sending their children to the school.

He said, “These farmers from the village are poor, but they were not ready to send their kids to the Zilla Parishad school – they would rather send them to a convent school in Risod which is 40kms far from the village.” “I could not have blamed them for their decision after all; there was nothing appealing at all and neither was the environment conducive to learning,” he added.

There were around five teachers at the time Garde joined the school.

“The infrastructure of the school did not meet the standards – the school building was dilapidated, and it did not pose an excellent picture in front of the students. The students had no real fields to play also. Why would anyone want to go to such a school?” he explained.

“There were around 145 students in the school at that point of time,” Garde added.

The condition of the school prompted 33-year-old Garde and his group of teachers to work for the school-goers in the village.

What did the dedicated teachers do for the school?

“Adequate funding and participation from the villagers were the first steps towards making a difference in the school in Nawli,” Garde said. “However, the villagers have had a bitter experience with the government schools and the teachers. So we knew that expecting anything from them at the first go would be wrong on our part,” he added.

The team comprising Subhash Sadar (52), Krishna Pallod (33), Rahul Sakharekar (31) and Gajanan Jadhav (36) along with Garde himself plunged in to make the villagers feel the difference they were had waited for so long.

“Previously the school used to start at 10:30 am, but once we took charge, we made it sure that the teachers reach on time for the school. In fact, we teachers used to reach school by 8 in the morning and carry out the necessary preparations for the day,” he said.

Under the headship of Narayan Garde, the small village school started running smoothly for 365 days a year. “We did not take any leaves and worked day and night to better the conditions of the school. We were aware that the students had had significant lapses in their studies and to fill the gaps we started regular classes for them,” he said.

“We used to celebrate the festivals in the school itself along with the students. This was an attempt to strike a bond with them, and I can happily say that we have been able to do so,” Garde smilingly added.

Each of the teachers had donated a sum of Rs 30,000, and with the entire amount, they had started off with the work of renovating the only school in the village. “Our efforts bore fruit, and the villagers had begun offering their help to us. Almost Rs 4 lakhs were collected by the villagers that were handed over to us for the betterment of the school,” he said.

With the money that was received, the school underwent a total revamping of its resources. “The school building was coloured, and the old and broken blackboards were replaced with new white boards. Inverters were fixed to curtail the problems of electricity, and other basic needs were taken care of immediately,” Garde explained.

Toilets were renovated, and the need for steady drinking water was also taken care of. The school remains open in the evenings too, when the parents accompany the students for revision of their lessons.

The visible change that followed

The new found resources had helped the teachers to make the school appealing to the young minds in the village. “With the school building being painted and the playgrounds being cleaned and fit for use, the parents now wanted their wards to study in a nearby school rather than travelling to Risod,” Garde explained.

“In fact, the ones who used to go to faraway schools now started enrolling themselves in our school – the strength of the students increased drastically from 145 to 400. We faced a situation when we were forced to put a board outside the school saying that we would not be able to take in any more students,” he said.

Garde and his team are overwhelmed by the respect and the love they have received from the villagers. “They had extended their helping hands towards us every time we faced a problem. Today they claim, that their notion of a government school has been changed completely by the work we have carried out – this serves as a source of great encouragement for us,” he beamed.

“The local authorities have taken a lot of interest in the betterment of the school and after seeing our success story, has invested in uplifting the education scene in the nearby areas,” he said.

“But, I think the best inspiration comes when we hear that students from nearby villages are citing our school as an example and urging their local authorities to make similar arrangements for them,” Garde pointed out.

The school now is aiming at digitalising all its classrooms and setting up projectors, four of them have already been done. Garde said, “The alumni of the school have expressed their desire to help us with setting computer rooms; we are eagerly waiting for that to materialise. We now have a greater number to teachers to help our students who come from twelve nearby villages.”

The Logical Indian community appreciates the work Narayan Garde and his team is carrying out in a small village like Nawli. The remote areas of India are yet to receive the light of education; it is because of dedicated people like Garde that this change, however small, is made possible. We wish them best of luck and sincerely hope that they serve as an inspiration to many others.