Meet The Man Behind The Voice Of Madhya Pradesh Farmers 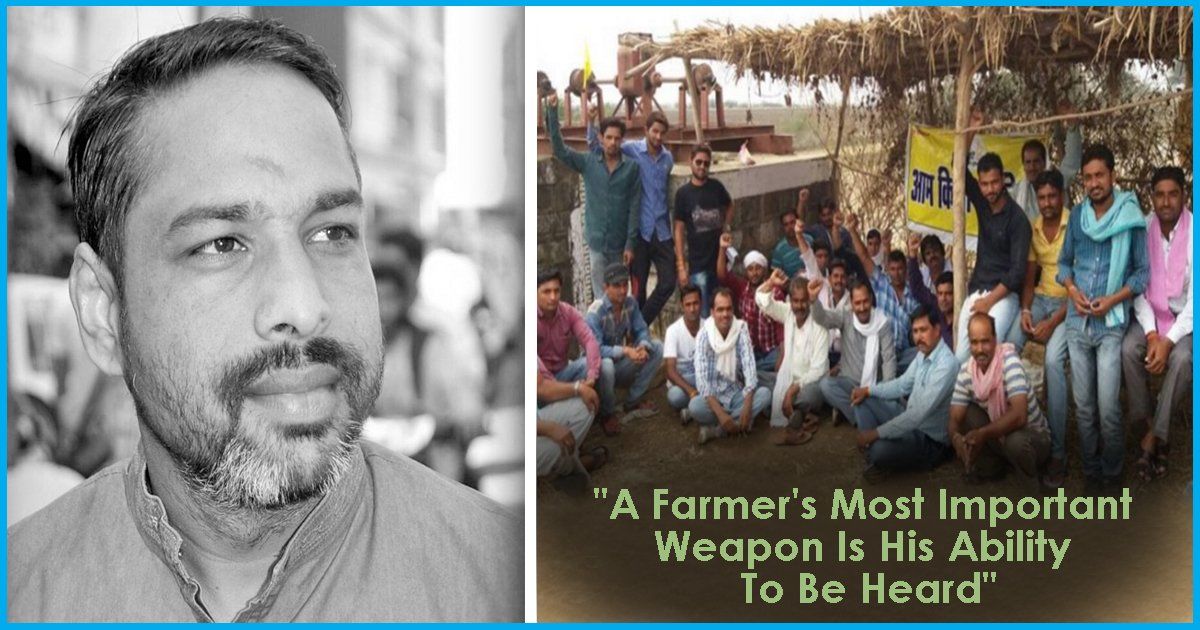 “At a time when the country’s farming sector is going through a turmoil, a farmer’s most important weapon is his ability to speak and be heard,” said Kedra Sirohi.

As the founder of Aam Kisan Union (AKU), he started a movement – a movement to uplift the farmers and give them a platform to be heard.

Kedar Sirohi is a farmer by birth and an agricultural economist by education. He grew up in Hedar, Madhya Pradesh and recognised the ills in the farming sector very early on in his life.

“Whenever I used to visit my village, the locals spoke of the problems that they faced every day. Each one of them had a concern, but no platform to voice it. This made a couple of us think – if we don’t help their cause, who will?” said Sirohi with immense vigour in his voice.

“There are two areas of work. The first is production – identifying what can be grown, engaging in farming activities and making profits. However, while agriculture is happening – the framers are doing their jobs, the production is constant – government policies are stagnant. This is the second area where work and progress are essential. Since the country lacked efficient policies, we know that we had to fight for a system that gives profits to farmers. With this thought, our interest in agriculture activism grew,” he continued.

With this, he started the Aam Kisan Union – a non-political farmers’ organisation aimed to urge the government to bring in policies to uplift agricultural workers.

The Logical Indian, in an interview with the man who gives voice to Madhya Pradesh farmers, lays his journey and inspiration behind taking the cause of Indian farmers.

“Aam Kisan Union is a non-political movement that I started in Harda district in 2011,” said Sirohi. The union has no President or head and works under the leadership of its common committee comprising eleven farmers. “The committee is our chairperson, our President and our head,” he added.

AKU was started locally to raise the voice of the commoners. Its aim is to recognise local problems and their solutions and fight local issues. “The union majorly consists of youth who are educated graduates and postgraduates,” said Sirohi.

“We have unique rules and regulations in the union. Anyone can put forward their voice – that is its beauty. We include all farmers but focus more on small and marginal farmers because they are the ones unable to raise their voices. The big farmers are able to discuss their concerns with politicians, the government bodies and local authorities, but the small ones continue to suffer in silence,” he continued. “Till date, we have achieved a lot of things. The union has clarity of issues and hardly any internal conflicts. We recognise issues with the farmers and take them to the government. From 2012 to till date, we have received Rs 400 crore compensation under the crop insurance policy. We see this as a major success for our movement.”

The Aam Kisan Union has unique methods of protesting and putting forth their concerns. To urge the authorities to take action, they once dressed as Yamraj sitting on a buffalo to collect dues from government offices. In another case, the farmers dug their own graves and lay on the ground to protest farmer suicides. The union has a non-violent approach toward issues and aims to bring changes through silent acts of revolt.

“We also organised a Jal Satyagraha in the water of the Narmada river where the farmers pretended to drown themselves,” said Sirohi.

“Basically, AKU was started when the educated kids in our district could not get jobs and they began farming. Sooner than later they realised that the industry has a lot issues. They wanted to bring out a change in policies. All of us kept forward our views and decided to work toward the betterment of farmers,” he added.

The Aam Kisan Union is funded by the farmers themselves. All the protests or movements organised by them are also financed by the farmers. “Our movement requires minimum cost because we are bound by common goals and there is immense unity. When we go to the government, the authorities know that we mean business which is backed with proof. We collect data ourselves and prepare good arguments to put in front of the government.”

The role of social media in the movement

“The thing that aided our endeavour the most was social media. If you go to the AKU Facebook page, you’ll see all our work in the last 5 years. We work through this medium. I strongly believe that if you have a problem, why come to the road and protest when you can reach a larger audience through the internet? After all, our ultimate goal was to make our voices he heard in the offices of the ones who can impact our cause,” said Sirohi.

When asked if the farmers are comfortable with the technology, he amusingly said that in progressive India, farmers are learning newer ways to approach issues and many of them are adept at using the internet.

“Social media played a crucial role in the recent movement in Madhya Pradesh. After Whatsapp, Facebook and Twitter, discussing concerns has become easy for anyone with a phone in their hand. In our village, we have the youths who are always connected to social media. When such a strong medium connects us to every possible place, why not make the maximum use of it?” continued Sirohi.

“The Madhya Pradesh farmers’ protest highlighted a lot of important points,” began Sirohi on the recent state protests that claimed the lives of seven farmers.

In Harda, the movement was led by educated farmers – it was peaceful and we put forward our voices by halting production altogether. Milk, vegetables, pulses, nothing was supplied to the cities and there was absolutely no violence involved. We understood the kind of voice that was needed to be raised. But in some areas, the movement turned violent because of the anger built among the protesters through the years. And when the government retaliated with bullets, the situation turned even direr. The mismanagement was the fault of the authorities,” said Sirohi.

“Every farmer came together in the protest – this was the strongest united movement since Independence. There were so many organisations that worked jointly because our demands were the same – compensation for the farmers and a minimum price of all the products to avoid future losses. For the first time, everyone came together and left behind politics to fight for a cause. The organisations did not engage in petty internal conflicts, instead worked to be heard in one voice. We were led by our problems, and didn’t need anything else,” he continued.

Sirohi argued that the farmers had to take unique and hard-hitting measures to ensure that their concerns are being heard. The farmers threw vegetables and milk as a sign of protest because the prices of these items have not risen in years and it’s more profitable for farmers to throw them on the streets than take them to the market to sell. When farmers are not getting profits for their produce, they might as well throw it,” he opined.

A need for reforms in the Indian agricultural sector

When something sells for Re 1 in the market and taking the same thing to the market costs Rs 3, what do you think is more profitable? Our main demand from the government is that at least our cost of production is covered. The Madhya Pradesh protest happened because there was a lot of built up anger in the farmers,” said Sirohi.

He mentioned that loan waivers are still not sanctioned as the government has asked for a month’s time. “The framers also understand that for any policy to come into force, time is needed,” he continued, “and right now, the sowing season is going on which is a crucial time for us. However, if our demands are not met by the deadline, the movement will restart. We know that the only way to claim our rights is by unity and we will keep fighting until we get what is ours.”

“The government had promoted Madhya as a model agricultural state. But just by showing this in a powerpoint presentation does not help – all this is only papers, and this is why the framers’ troubles grew. The frustration of all these years came out through the protests,” said he.

Sirohi hopes that the future has in store farmer friendly policies. “But the first step to ensure this is by increasing input supply and reducing cost, promoting education and making cooperative education for farmers available so that his future generations are secured. Next, comes healthcare. Out of all the farmer suicides, 30% occurred due to the poor health of farmers and the lack for money for treatment. The farmers committed suicide because it’s easier for them to die than to sponsor their treatment. Everything comes down to one issue – the farmers don’t get prices for their produce, hence, their lives are further degraded,” he continued.

“Our current production efficiency is 150%, and our goal is to increase it to 250-300%. But this can happen only with the help of the government,” opined Sirohi.

Growth of the farm sector, but no growth of farmers

“When an industry grows, its share value increases, thus its stakeholders profit. But this isn’t happening in the farming sector because even with a growth in the industry ( we have doubled the production), prices remain constant,” said Sirohi.

He believes that the farmers invest their blood and sweat in feeding the nation, but they are not rightly getting compensated for their efforts. “Our soya beans which were sold at Rs 50 are sold at Rs 25. Moong dal which was sold at Rs 70-80, is now being sold at Rs 40. So where are the products, or even the money to cover the cost of production?”

“Every year, the cost of inputs increase by 10-15% and the production increases by nearly 20%. But every year, we get 30-40% less prices. So there’s loss from all sides. The government claims of scheme and policies that help the farmers, but all of it is only on paper. The claims need to be backed with proof of how many farmers have actually benefitted from the schemes?” he continued.

Sirohi believes that any change can only be brought about when people at both ends listen and undertake initiatives to solve the issues.

The Logical Indian community commends the efforts taken by him to uplift the lives of Madhya Pradesh farmers. He has given them a channel to voice their issues, and in a democracy, nothing matters more than the right to be heard.