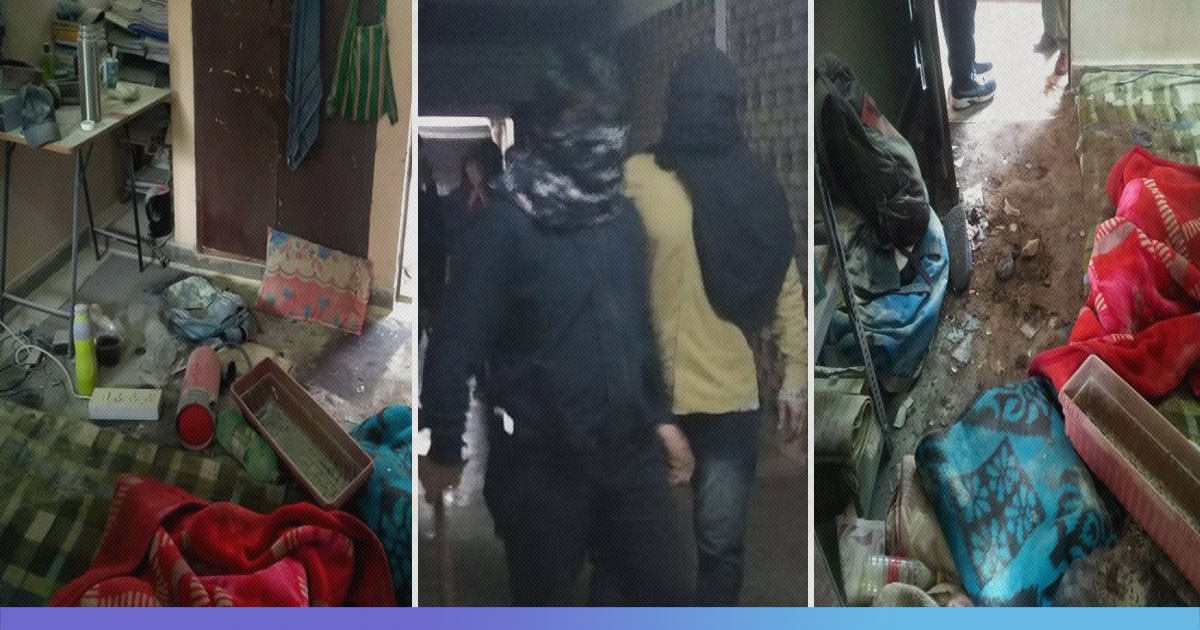 'There Is Blood On Their Hands': JNU's Sabarmati Hostel Students Recall January 5 Horror

On the night of January 5, 2020, Jawaharlal Nehru University's Sabarmati Hostel was a ramshackle building. All one could see were ransacked rooms and shards of glass from broken windows.

A tense air, a sense of fear reigned across the campus.

A mob of violent, ruthless masked goons created a warlike situation in the JNU campus, storming into hostels and brutally beating up students and teachers.

"There's blood in their hands," Surya Prakash tells The Logical Indian, in a voice which is evidently in distress, and yet very steady.

Visually impaired Prakash is pursuing his MPhil in Sanskrit.

"The attack was planned. They turned off the lights intentionally. We could hear them hurling filthy abuses at us, and chants of 'Jai Shri Ram' rang in the air," Prakash says.

Prakash alleges that the masked men and women began breaking down doors and windows of the Sabarmati Hostel and beating up students mercilessly.

"They began beating me up and I kept shouting and asking them to spare me because I am blind, but they paid no heed to what I said. I believe they were all drunk. I clearly heard a woman say: 'Andha hai toh kya hua, maaro iss ladke ko' (Doesn't matter if he is blind, beat him up). I am able to move around a little now because of the painkillers," Prakash says.

Prakash claims that he called 100, the police, in a hurry.

"Police very calmly told me: 'Thoda sa maar kha lo, humko toh waise aana hi padega' (get beaten up now, we will have to arrive anyway). I was helpless and appalled. Ever since then, I have been getting threats from multiple unknown numbers, a list of which I have noted down. They are threatening to destroy me, kill me. They are warning me against talking to the media. But this is not the time to be afraid. This is the time to fight unitedly," he says.

Udita Halder, pursuing her PhD in Economics, recalls the horror as she saw a huge mob of masked, armed men walking up to carry out a coordinated attack. Halder was outside her hostel when she got a call and rushed to the spot.

"They had bricks, rods and sticks with them. JNUSU president Aishe Ghosh was with me when she was brutally hit on the head and began bleeding profusely. A brick nearly missed hitting me. I saw a girl become paralysed with fear as she got hit on the head – she collapsed and couldn't move. This was not a mere attack. This was war," Halder says.

Monika Bishnoi, a student pursuing her Bachelors in the Korean language, was in her room when she heard chaos outside.

"We locked ourselves inside the rooms and came out only after the noise lowered down. The entire place was a mess, people were bleeding, panicking and crying. It was a sight hard to look at," Monika says.

"We got no immediate medical help or any assistance. There was no support whatsoever from authorities or police. Police did not care that our lives were in danger. Who do we depend on? Who can we count on? It's like the students against the world," she adds.

Dhruv (name changed) was at the peaceful meeting organised by the Jawaharlal Nehru University Teachers' Association which was also targeted by a group of masked men and women armed with iron rods and sledgehammers.

"I was at the meeting. Everything was normal and we were having a good discussion. Out of nowhere, we saw people marching towards us from the Godavari bus stand," he says.

Dhruv says that as soon as the meeting point was in clear view of the mob, they started hurling stones and people started running for their lives.

"Some took shelter in Sabarmati hostel, while others rushed to Tapti hostel to protect themselves," Dhruv says.

Unfortunately, Dhruv was among those who could not find a safe place in the mayhem and ended up getting inside '24×7' – a food joint inside the campus. The goons followed them and ransacked the entire place.

"I saw them beating my own friends. JNSU President Aishe Ghosh was hit on her head in front of me. I was terrified," Dhruv says.

Phones of many students were snatched and smashed by the mob as they tried to record videos of the incident.

"We all called the police as the situation exacerbated. When we sought help from the police who were inside the campus, we were rebuked and threatened of being beaten up if we did not immediately move away," Dhruv concludes.

"When I reached the Periyar hostel to see the mob, I saw masked men along with police in riot gears running towards Sabarmati hostel," Priyanka (name changed), a PhD scholar says.

After she followed them till Sabarmati Dhaba, she saw the cops coaxing two to three male students who were standing there, to move away.

"Students who were eating were beaten up and forced to leave the 24×7 food joint," Priyanka says.

As she was scrupulously recording everything on her phone, about 15 female constables spotted her and gheraoed her. "Female constables who did not have their badges forced me to delete the pictures," she says.

Meanwhile, some of the cops hit her on her right leg with tree branches. One of the male officers snatched her phone and deleted all the pictures and videos she had taken earlier.

"They tried to break my phone but could not," Priyanka says. She also says that the attack on the campus on Sunday was premeditated and pre-planned.

"I was inside my room when I heard the sound of vandalization coming from the hostel itself. I stepped outside and saw panic-stricken female students rushing inside their rooms," says Jyoti Kumari, a student of the Russian language at JNU.

"After 10-15 minutes, when the sound died down, we went outside to check the situation, and it was then that the hooligans attacked us. They beat up the students with rods, shovels and stones," Jyoti adds.

"When I was recording a video of the incident, one of the miscreants hit me on the right arm with a stone and abused me. A female student was beaten and dragged out. Police were inside the campus, but they showed up only after the students were beaten up," she says.

Jyoti also said that the Sabarmati hostel senior warden Ramovatar Meena and another warden Prakash Sahoo fled from the spot while the mob vandalized their hostels.

Nearly three days after the masked goons went on a rampage in the JNU campus, Delhi Police is yet to make a single arrest.