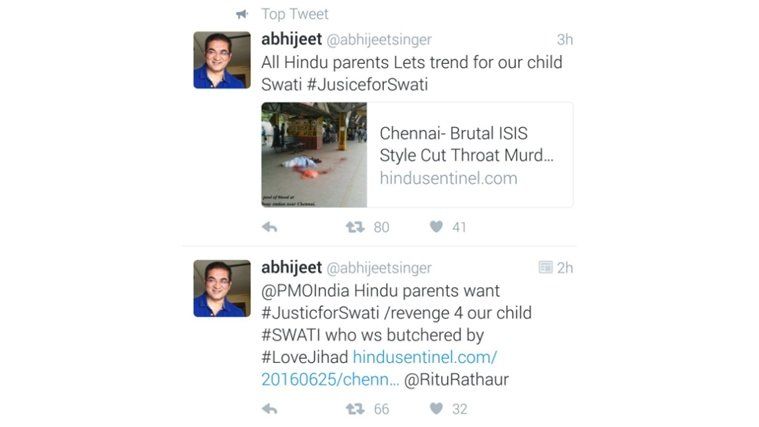 Social Media continues to evolve at a fast pace, it is no more just a place to connect with people, today, it is a place to win votes, mobilize people, do campaigns, change perceptions, interact and could also win elections. It is in this evolving process, social media, despite its huge positives, has thrown few challenges too. The condition of anonymity has given rise to a huge set of online abusers who do not hesitate to use a tone or language that intimidates, threatens one’s dignity, safety, and security. Various people have become victims of abuse and intimidations on the social media. One such episode happened earlier that involved singer Abhijeet, who has about 96,000 followers on social media and had tweeted a number of indecent and threatening tweets against two socialites that included a woman. This time, when he had falsely accused a techie murder in Chennai a case of love jihad, which later came out to be untrue and given the large following of Abhijeet, few socialites including Swati Chaturvedi made efforts to correct the mistake which led to a barrage of hateful misogynistic and threatening tweets from him. This is not the first time that the singer has tweeted like this, but certainly breached all decency and public probity expected of a big name singer like Abhijeet. His statements certainly called for stern actions against him.

Being a resident of Delhi, Swati was informed by the Mumbai Police to register a zero FIR in Delhi and it would be transferred to Mumbai, where Abhijeet resides. However, Delhi Police was reluctant to register the FIR and it took Swati to immense effort to finally transfer the case to Mumbai.

But finally, justice was meted out as Abhijeet got arrested, though released on bail later. What is welcoming from the whole episode is the fact that police have acted on a complaint made by a woman who felt threatened by online abuse. Which is welcoming because of the fact that many people from various walks of life are being threatened and abused online on social media. A culture exhibited by a few who do not hesitate to use words that degrade dignity of a person specifically but also exhibit a mob mentality that intends to intimidate and threatens people who speak with a different opinion.

It is on that front, the actions of a public figure like Abhijeet is completely regrettable. We hope this arrest will deter the few who are out there and spoil the decorum of social media. The Union women and child development minister Maneka Gandhi has set up a helpline for women facing online abuse. We urge our community members to use this helpline following any cases of such online hatred, abuse and trolling. The fact that Abhijeet still has a large number of followers show that many still considers it as a right thing to abuse a person online. Let us unitedly show them that the internet and social media cannot be used to spread filth. We request every person who faces such harassment to seek a remedy, complain those incidents to cyber police.

If police can act against celebrities like Abhijeet, then a common man can definitely seek help in this regard.