Bringing Healthcare To The Homeless: This Doctor Dresses Like A Homeless To Help The Destitutes 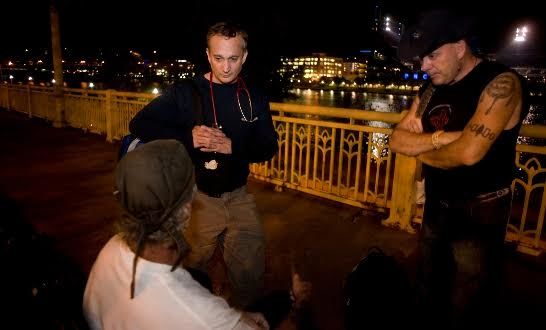 Dr Jim Withers is a street doctor in Pittsburgh, Pennsylvania in the United States whose office is his backpack as he goes around treating homeless people.

He is a Physician who teaches Internal Medicine with the Pittsburgh Mercy Health System at the University of Pittsburgh. For the last 23 years, Dr Jim Withers has been doing street rounds in the city, bringing medical care to the homeless. He was also named as a top ten hero of 2015 by the Cable News Network (CNN)

Dr Jim Withers spoke exclusively to The Logical Indian about his initiatives and how he brought medical care to the everyone.

How did this journey start?

In my childhood, I enjoyed making home visits with my father who is a physician. My mother is a nurse, so we worked medically in Central America a lot of times. The concept of visiting (and therefore honouring) people was a very natural concept to me when I became a physician. I learned to love the inner city poor and teaching has always given me a great sense of purpose, so I became a teaching physician in that context. What inspired you to initiate Operation Safety Net?

Much of my professional career has in some way focused on trying to invert the power structure of health care. We have created a rigid system that requires people to climb a steep and arduous mountain to get the services they need. The requirements of the system are almost always emphasised over the needs of the community it serves. One of my first and most profound professional journeys to the reality of others was in the arena of domestic violence. In India, as a medical student, I witnessed many women who were burned and died as a result of dowry extortions by the husband’s family. The attending doctor told me it was due to dangerous stoves. When I began work in Pittsburgh, I again saw how common but invisible domestic violence was in our patient’s populations. I worked to create solutions that would connect with the victims and also better serve a system that was being unconsciously affected by their suffering. The prejudice, the shame and active neglect of my peers and the system brought me to a crisis as a medical educator about the fact that we could not effectively create care grounded in reality and with the solidarity of our patients. I decided that a cognitive leap would require a “new classroom” and the radical inclusion of people living under bridges seemed like an excellent local option.

How was it to go in the homeless camps?

When I started going to the homeless camps and abandoned buildings, I asked a formerly homeless man to escort me, and I dressed like them. It was my “undercover period”. I wanted more than anything not to be seen as the powerful doctor but as a person. Very soon I was embraced by the people on the streets and realised I didn’t have to dress like a homeless person. I began visiting them 2-3 nights per week and later, other medical volunteers were paired with formerly homeless people to form other teams. Over 25 years, our organisation has grown to include medical offices, a range of housing options, legal advocacy and a broad array of social services. But the core work continues to be backpack medical trips to the places where people sleep. What are the conditions at the camps? How did you help them?

In Pittsburgh, the street homeless has a wide range of usual medical issues that have been adequately treated. We see more advanced stages of illness. Also, there are medical problems related to the street environment such as frostbite, trauma and the ravages of addiction. Primary mental illness and mental conditions that result from street homelessness are common too. We start with building trust and then work on each issue as people. The solidarity of our relationships allows us to make progress when others have not been able to help them.

How often do you visit them?

We currently visit the homeless every weekday and night. During winter, we run a specific shelter for the most alienated people and see them every night from November through March. There are both routine visits and targeted visits for high-risk individuals. We have developed a city-wide network of relationships with other systems and are alerted about people in need. What is the government doing to address the problems of homeless people?

In Pittsburgh, the city government and county government have created opportunities for groups to coordinate care and work on long term solutions. We tend to be a lead partner since we know the streets so well. The Federal government has provided funds to help us place people from the streets into apartments. Our teams follow those people to help them maintain housing.

Any gesture in the camp that moved you. Please share any anecdote you felt had helped you continue your work.

I have 25 years of stories (I am working on a book), but thinking back to the early days I remember how people would cry when they realised I was there to help them. One man said, “I can’t believe someone cares we are alive out here”. It reminded me of the gratitude I felt when hugging patients with leprosy in South India as a medical student. Every day that people still express that love and appreciation helps me keep going. I also see people (like a guard in a local bank) who thank me for helping them 20 years ago when they lived under a bridge. Another very important encouragement is to see my medical students go on to careers of service – many starting their own street medicine programs throughout the world. What is the ultimate goal?

My ultimate goal is to be part of a larger movement to humanise healthcare and society. Only by directly getting to know the reality of others can we heal our communities. I have been working to create a “new” field of medicine that I call street medicine. Healthcare and medical education are powerful and symbolic parts of our culture where the example of our work can make others reflect on the core values. Street medicine is, therefore, both immediately practical and a force for long-term change. Every person sleeping on the streets globally should have the kind of direct care that street medicine offers. And I believe every health science school should have a “classroom of the streets”. I am working to phase my career from primarily direct care to counselling cities on starting their own programs and doing more writing and speaking.

What messages do you have for the government and our readers?

I probably have too many things to say to the government and society, but one strong bit of advice is contained in the tagline for the Street Medicine Institute. It says, “Go To The People”. By going directly to the people themselves with humility and love, they will teach you how to solve the problems together with them.

The Logical Indian salutes Dr Jim Withers for providing medical care to Pittsburgh’s unsheltered homeless population. We hope many other people here in India extend help to the homeless people to provide them with medical care.