Can Justice Be Delivered In Reasonable Time? 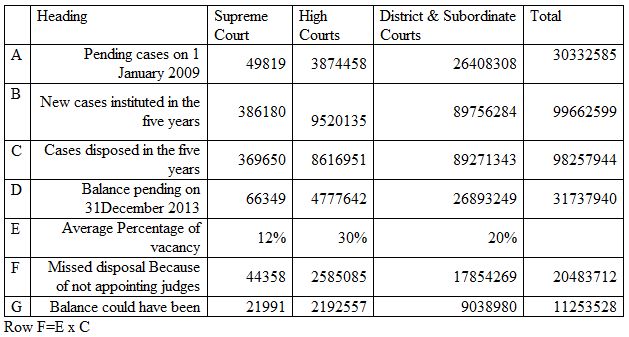 The Supreme Court has declared Right to Speedy justice as a fundamental right of citizens, but this remains a myth. Disregard of a fundamental right is happening in the courts of India, and there is no redressal available. Nearly two thirds of those in the overcrowded prisons are under trials. A judicial system which proclaims that a person is innocent until proven guilty, incarcerates two thirds of those in prisons without any guilt having been proved. The rich and powerful are treated as innocent most of the times and it is very rare to finally prove their guilt. On the other hand the poor are kept in prisons and the only reason they continue there is their poverty. It is an irony that there is more empathy for animals in cages, than for the caged prisoners. Article 14 of our Constitution promising equality before law is violated daily in our courts.

When we blame criminalization of politics, it primarily means those charged with crimes, not necessarily those whose crimes have been proved by our legal system. A rich or powerful criminal or someone who has usurped the property of a poorer man can prolong the trial at will, until he gets a favourable weak link. Actual punishment is a rare occurrence. This leads to increasing disrespect for the law. There is some discussion in the nation, whether the increasing trial by media is right. Society has realized that in most cases closure is unlikely in the case of the famous and rich before their death. Media trial is now fulfilling the public’s need for retribution, since the hope in getting it from the legal system is low. The other way satisfaction is obtained is when bail is denied. Delays in investigation are also responsible for this state of affairs, but the main bottleneck is in the courts.

We have been hearing that the Indian Judiciary would need centuries to clear its backlog. Since everyone talks of the huge and insurmountable backlog, the legal and judicial system has accepted that unless the number of judges is increased twofold or threefold, the judicial system cannot cope. It appears to have been accepted that a judicial system which can deliver timebound justice is unlikely. I decided to take a look at this issue by doing some number crunching to see how many judges we would require to ensure that the inflow of cases can be cleared. The number of judges required should be adequate to deal with the number of cases which are instituted. The Supreme Court of India publishes a quarterly ‘Courtnews’, from which I have taken all the data for a five year period from 2009 to 2013. This is available at the website of the Supreme Court at http://supremecourtofindia.nic.in/ in Publications. The Indian judicial system has become irrelevant for the common citizens, and this is responsible for many ills plaguing our Nation, like disrespect for laws and corruption.

The analysis of these figures is tabulated below. This shows that the number of sanctioned judges is adequate and if all the sanctioned judges were appointed mounting pendency would be history. I have only taken the average vacancies of judges and assumed that if all the judicial positions had been filled, the disposal would go up in the proportion of the percentage of vacancies. The total number of pending cases in 2009 was 30.3 million which went up to 31.7 million in 2013 end. If all the sanctioned judges had been appointed, it is a reasonable forecast that the disposals would have gone up pro rata ie. 20.48 million! In that case the pending cases would have been merely 11.25 million cases! There can be no excuse for keeping judicial positions vacant while the nation suffers because of this neglect. The retirement date of judges is well known. The process of selecting new judges can start six months ahead for those retiring. An extra 2 percent buffer could be kept for rare events like death or resignation of judges. This is a simple solution and can be implemented very easily.

For the sake of the nation all those responsible must ensure that all judicial appointments are made in a timely manner. An easy solution is available. This analysis suggests that if a simple discipline of ensuring zero vacancy is followed, the sanctioned strength is adequate to dispose the inflow of cases and some backlog. Even now if this is implemented the problem will move towards a resolution. Many suggestions have been given for increasing the speed of disposal. All of this is without taking into account the actual reality. Perhaps no analysis has been based on the actual data.

This suggestion does not assume an extra speed in disposals but only depends on filling all vacancies and assuming that the current disposal rates would be maintained. I agree cases are different in nature but a five year data taken over 20 quarters is likely to take care of all the possible variations. If our judiciary does not deliver the fundamental right of Speedy justice, the nation may go down a slide from which it may not recover.

Note: In some quarters the Supreme Court’s website does not give an arithmetical balance. This may be due to some adjustments of errors. But the final pending balance shown on the website for the three courts is 66349, 4589920 and 27566425 respectively which would give a total of 32222694 instead of 31737940 which is a deviation of 1.5% and would not affect the conclusions significantly.