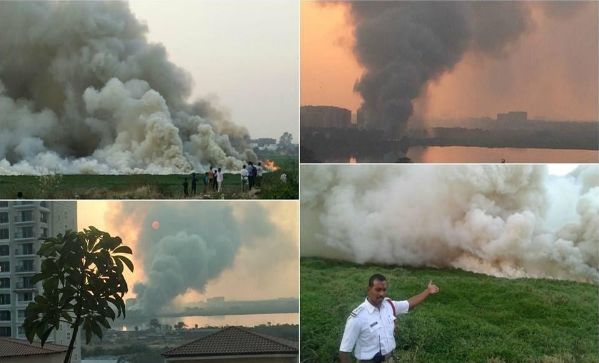 On February 16, Mr. Prabhath Vijayan posted pictures of fuming smokes emerging from the wetland surrounding Bellandur Lake, Bangaluru. He is a part of the Facebook group “Bangalore Eco Team” which has a good number of solid waste management volunteers across the city, along with Bruhat Bengaluru Mahanagara Palike (BBMP) officials including its commissioner, joint commissioners, etc.

The BBMP is the administrative body responsible for all civic and infrastructural assets of the Greater Bangalore Metropolitan area.

One among the “Bangalore Eco Team” volunteers, Mrs. Seema Sharma, who stays in an apartment adjacent to the lake, has been witnessing frequent garbage dumping in and around the lake. She, along with other residents, raised this matter to government officials and ward leaders for more than 6 months now. However, no action has been taken yet.

The Logical Indian spoke to Mrs. Seema Sharma to provide us with further details on the issue.

Bellandur Lake is polluted with toxic chemicals from factories, taking in about 500 million litres of untreated sewage water each day. Unauthorised dumping of construction waste, mixed garbage waste, including dry and wet waste and open faeces has turned the land into a breeding ground for diseases and toxic emissions.

Residing in an apartment adjacent to the open area, Mrs. Sharma expected a pleasing view of the lake. However, when she steps out on the balcony, all she can see are trucks pouring in everyday and dumping toxic waste materials into the lake and its surrounding area, which is later burnt. Since the past one year, residents have been filing complaints with the lake authorities, the Pollution Control Board (PCB) and the BBMP, but to no end. The lake has caught fire several times with fumes polluting the nearby areas. However, on February 16, a fire broke out like never before. Considered to be one of the biggest fires in the city, fumes of toxic smoke caused panic among locals. Copy of the complaint letter sent to BBMP

“Small fires keep breaking out every other day”, said Mrs. Sharma. The wetland is also home to hundreds of people who pick and sort the waste disposed. Since it’s a wetland and no legal construction is permitted, they live in illegal huts, she added. The whole area is surrounded by slums and the garbage is burnt right next to it. Recounting an incident from October last year, Mrs. Sharma said that the lake had caught fire which kept burning continuously for five days. It was 100 metres away from her apartment, but the smoke was so thick that she and her family members had to wear masks inside the house. Children with respiratory issues had to use nebulizers. However, people living in the slums are subject to worse conditions – there are casualties due to the toxic smoke and diseases are spread easily, but the poor people have no alternate housing option.

After the 5-day fire, protests erupted which caused a local MLA to take some action – the garbage was covered with mud. Furthermore, the wetland was also supposed to be vacated, but only a few huts were removed and after a while new huts started coming up. It is speculated that the slum dwellers also pay deposits for their huts and when their homes are destroyed, they lose all their money.

The Bellandur Lake comes under the jurisdiction of 3 to 4 wards of different zones. Oftentimes, when a fire breaks out on any one side of the lake and a ward official is called, he refuses to look into the matter, stating that it does not fall under his jurisdiction.

Residents of nearby housing complexes have also noted down the numbers of the trucks that dispose the waste, and given it to the police. But help was not offered from their end too. All officials – police, fire department, environmental protection agencies, BBMP commissioner’s office, health officers, corporates, animal protection agencies, lake department KSLDC, PCB, KSPCB and local MLAs – keep passing the information and evidence to the next higher authority till it is forgotten in the hassle.

Bellander ward is one of the largest wards with a lot of IT companies. However, the management disregards the mandatory court order that each decentralised ward should have a dry waste collection centre and a waste processing centre. Because of this, waste is disposed on roadside, which is then picked up and disposed in the lake and the surrounding area.

Residents of the area speculate a political agenda behind the waste disposal. In broad daylight trucks come and go, depositing tons of garbage, despite frequent fires in the lake. Big industries and construction companies dispose all kinds of waste – electric wires, polystyrene (thermocol), plastic, construction debris, etc. – degrading both the water and air quality of the area.

“Maybe it’s all part of a big plan – a fire breaks out, thus destroying all the garbage. Then the land can be filled with mud and sand, thus destroying the lake too. Finally, the land is sold to real estate on a high value”, speculates Mrs. Sharma. “But as ordinary citizens we can only complain and try our best that the matter is resolved”, she added.

After October’s 5-day fire, PCB visited the area and directed the BBMP to take action within 7 days, but nothing happened. Everyone is aware of the issue, but no single step is being taken. No one wants to take responsibility for the mismanagement. Even the fire department is unwilling to help, stating that no life or property is being damaged.

Bengaluru’s civic body and development authority – BBMP and BDA – are once again playing pass the parcel with the city’s lakes, with neither agency willing to take ownership of or invest money towards revival of waterbodies.

The Bellandur ward has been coping with this issue of months now. Lack of government action and apathy has worsened the condition of the lake. It is crucial that the authorities look into the matter at the earliest, before the pollution causes serious threat to the lives of the residents of the area. The Logical Indian urges the ward authorities, BBMP and the PCB to take necessary actions to save the lake and improve the living condition of the surrounding area.