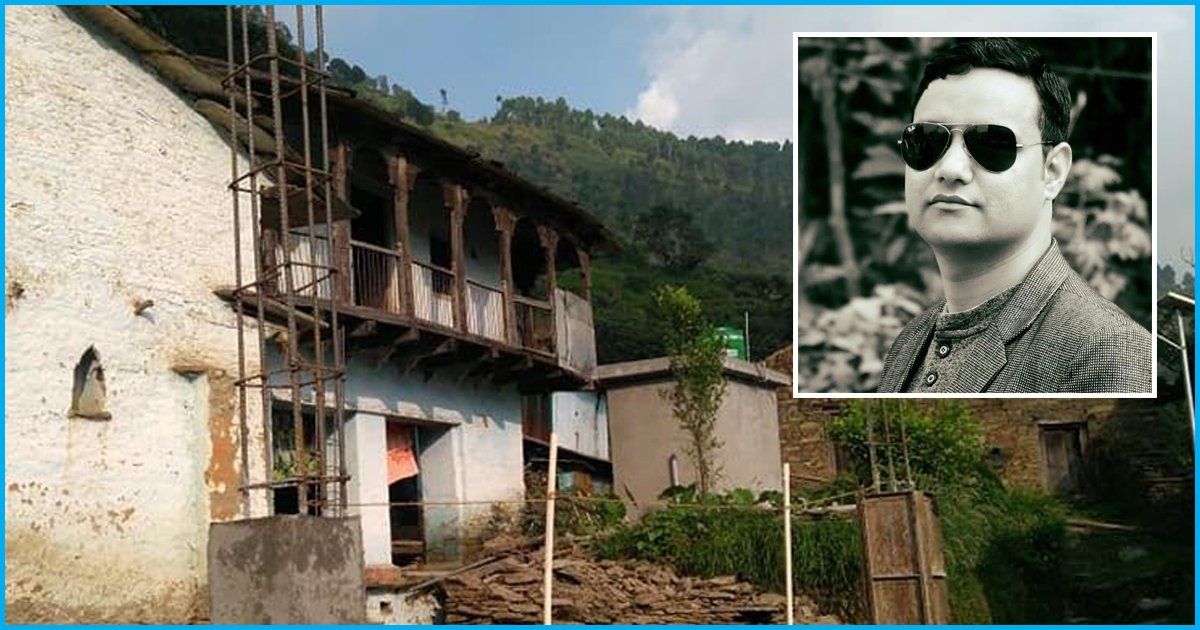 The primary cause of forced migration from Uttarakhand is poverty, health facilities, education and low employment opportunities. According to a recent government report, around 748 schools in Almora and Pauri have no students. Since the state’s formation in 2000, over 200 of these schools have recorded maximum forced migration.

In such crucial times, some young and vibrant people are putting extra efforts in a direction to make their hometown a better place to live in. A 34-year-old techie, Ashish Dabral, travels around 720 km (both sides) to teach his village students from Gurgaon to Uttrakhand during weekends. He is not only giving his best to revive education but also empowering the children with necessary skills, art and craft, and modern tools.

Dabral was born and brought up in Timli village of Pauri Garhwal District in Uttarakhand. He feels that lack of health facilities, comfort, regular employment are forcing native people to leave the place where they were born. Moreover, when it comes to education, unfortunately, village people have to suffer due to limited subjects and guidance.

After receiving a certificate course in Microsoft, Dabral worked in various multinational companies in both India and abroad. Later, he finally settled down in Gurgaon. “While working away from my village, I could not stop thinking about the place where I was raised. In 1882, it was my great-grandfather who began a school called Timli Sanskrit Paathshala that provided education to hundreds of students in Sanskrit, Hindi, and English. I too wanted to do give back to the place I belong to,” says Dabral.

The government took control of the institution that was started by his grandfather and converted it to a junior high school. “When I was in school, over 100 students were studying there. However, with rapid migration, there were hardly more than five students. So, I felt we need to revive education and bring back our brothers,” he adds. In a conversation with The Logical Indian, Dabral shared the whole story of his successful and beautiful initiative.

With his hard earned money and some financial help from friends and relatives, Ashish launched a trust in 2009, and it was in January 2014, when he opened Timli Vidyapeeth – a technology centre and primary school for computer education. It is located at Devikhet which is run by students of The Universal Gurukul Technology Center. Dabral told The Logical Indian, “So far, we have provided primary computer education to more than 70 students who had completed 12 months programme on the same. With my team, I started a service centre where students helped rural people in availing documents like PAN card, passport or shopping through online services”.

Ashish launched the school for underprivileged children in March 2015. At present, 40 to 50 students are getting benefit from this initiative under the guidance of three teachers who fight all odds to pursue their passion for teaching. Ashish said, “In 2016, my current employer British Telecom awarded me with Rs 50,000 for the initiative to bring “digital skills to people in remote areas. I used the money to build four classrooms in the school”.

How is it unique from others?

Timli Vidyapeeth is the first of its kind in the rural region of Uttarakhand as it is partnered with schools of the United Kingdom. This partnership with British schools helps student learn several qualities like good governance, professionalism and leadership, better ways to learn English, among others. “In return, we can share our best ancient treasure like Yoga, Meditation, and Panchatantra. Our students interact with the students of UK through video conferencing. Also, It is the first school to teach robotics to first classes students. We were fortunate enough that we got an opportunity to participate in the World Robotic Olympiad in 2017. We have provided five Information and communication technology (ICT) centres in Government schools, where all students study for free,” said Ashish.

Ashish wanted to start the organisation to take forward the legacy of his forefather, who had been educators in Uttarakhand (formerly Uttar Pradesh). It was needed to empower the people. “I involved more and more people in this mission as I never wanted to make it a ‘One man show’. We arrange skill development workshops for village adults so that they can earn their livelihood,” said Ashish.

“We have got recognition from two chief ministers of Uttarakhand due to our result oriented approach. Several government school students who were trained in our ICT center are now teaching in government schools. Using model tools like power tiller, we have re-cultivated 250 barren lands in villages. The young generation is developing an interest in agriculture and we have been approached by several who were interested in organic farming. Several mushroom production units are generating employment for our rural youth,” said Ashish.

Through sustainable model, they are targeting the youth and results are visible on the ground.

“I have set a target to establish Shri Timli Vedic Education and Research Centre in the next 5 years. At this center of excellence, we would be working on traditional techniques and practices to create sustainable villages in Uttarakhand where youth can find employment through horticulture, agriculture, dairy farming etc. Also, their kids can have an access to quality education,” said Ashish.

“I’m more concerned about our heritage and cultural values which are being overlooked by the youth. In coming years, I would like to establish a Vedic Education and Research Centre to pave the way for our next generation to understand the values and concepts of traditional knowledge with modern science and technology,” he continued.

“I would like to request everyone to find some time out for voluntary activities. Always listen to your heart as life won’t give us another chance to live the way we want to live it. Respect our heritage and cultural values and transfer them to our next generation to avoid an identity crisis situation in near future,” said Ashish.

The Logical Indian appreciates Dabral’s will and efforts to bring education to Timli that has certainly set an example for many.