When Aditya Ranjan got his first posting in the West Singhbhum district of Jharkhand as a District Development Officer (DDC), he was horrified to know the dismal situation of education and healthcare. But he was determined to do something with the responsible position he was allocated with and came up with his unique ideas to change the situation. It is often reiterated, "With great power, comes great responsibility" and Aditya's incredible efforts as a young IAS officer stand as a testimony to this quote. Working as a district development officer opened avenues for him to connect with people on ground and understand their problems which need to be resolved. Even at a personal level, belonging to the suburbs of Bokaro in Jharkhand, he has faced obstacles in completing his schooling. He realizes the need of the hour is to bring change in the educational infrastructure of backward regions and he aims to transform the schools in Chaibasa. Aditya Ranjan while interacting with kids at an Anganwadi

With his own salary and expenses, he developed the first Model Anganwadi centre. Later, with the successful results in improving healthcare as well as education, he went ahead to seek funds from the government authorities. When he first analyzed the Anganwadi centres in his district, he found that they had turned out to be the places where people would just come to have their meals and no educational activities were being conducted for small children aged between 3 to 6 years. He visualized of developing centres where nutrition, healthcare and education would be integrated together so that women, as well as children, benefit from them. He collaborated with NGOs as well, such as Titli, to make Model Anganwadis more impactful. The not-for-profit organization, Titli, helped them to train sahayikas or female workers who would be working at these centres. These Model Angadwadis also help pregnant women by providing them free of cost medicines and health check-ups. After replicating such centres successfully, he now plans to develop 1000 of them by the end of this year. 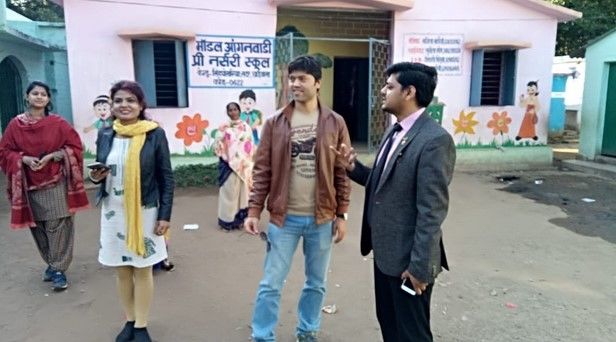 While reviewing work done in the centers

"When I initially visited an Anganwadi Centre, I was appalled to see its situation. The primary aim behind them is to provide basic meals to children and encourage them to come to schools. But there was a stark contrast to what was happening. They would just be there for the meals and go away after that. Although after providing them with basic amenities such as food, clothing, and stationery material as well as by improving the hygienic condition of the premises, we observed positive results. The percentage of children visiting these centres increased drastically. I have also launched an app named SAMIKSHA which helps us to monitor other Anganwadi and with it, we have been able to ensure that they open on most working days," shares Aditya Ranjan while speaking with The Logical Indian. Improving facilities provided in the school

At the core, Aditya believes that education and health are two primary precursors for a better future and spends most of his time researching on ways through which he can improve them in his district. In an age where everything has turned digital and computers/ laptops have become an indispensable part of our daily lives, he realized that most people in Singhbhum district lacked basic computer literacy skills. He came up with a highly innovative and beneficial program called the District e-governance society computer training program (DeGS), to battle this problem. The DeGS was started with the idea to provide an opportunity for the underprivileged to become tech-savvy. The program included an extensive course of 60 days consisting of 32 modules that covered all the basics of computers and more. The ever-increasing number of enthusiastic students from all age groups tells us that it has been successfully running in the district. Around 1,700 students have already been benefited by the program and he aims to make computer skill training a feasible option for people belonging to any age or any background. Although, it has not been an easy journey for him to implement his social initiatives and he points out that it is quite a slow process. 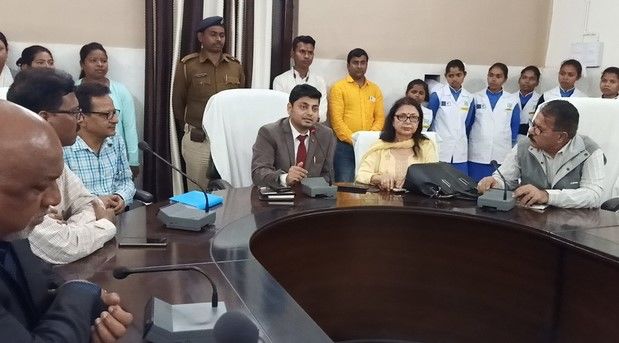 At regular work duties in his district

Talking with The Logical Indian about his journey so far, Aditya Ranjan says, "The pace at which things work in the government sector is slow. So, even if you want to implement any new initiative and analyze its outcomes, it would take a long time. Till now, we've received overwhelming responses from people of the district and it makes me elated on a daily basis. When you are able to impact lives positively with your work, it gives immense satisfaction and that feeling is irreplaceable. Although we might face a shortage of funds as opening new Anganwadi centres would require heavy financial investments. I hope that the state allocates more funds for such successful projects." Wonder On Wheels- Bringing Scientific Experiments In A Mobile Van

Another initiative by the talented young officer in the field of education is termed 'Wonder On Wheels'. While going through the database of high school and senior secondary school children, he found out that most of them were opting for the humanities stream. Further as he delved deeper into this, he found out that there was a dire shortage of science and mathematics teacher in West Singhbhum. As a result, most students were left with the option of pursuing arts stream only. The main idea behind establishing Wonder on Wheels was to develop scientific temperament in young minds and give them more options to explore their interests. This initiative began by providing every school with expert science and mathematics teachers with well-planned lessons and adequate technical support required to teach the subject. The infrastructural cost of developing labs in every school would have been massive. So, under this initiative, they developed a mobile van with all the necessary equipments. It would bring theoretical as well as practical learning to the school. The project now covers 30 schools in the Sadar area and runs in Chakradharpur cluster too. With this project, he aims to equip the government schools with adequate scientific instruments so that they do not lag behind the private institutions in terms of imparting practical knowledge to their students. He envisions a bright future for students of his district.

The Logical Indian appreciates the genuine efforts of the IAS officer, Aditya Ranjan, for working on improving education and healthcare in his district making the country a better place to live in.

Also Read: This Rajasthan Cop Is Going The Extra Mile To Educate Over 450 Homeless, Poor Kids