A Documentary On Manual Scavenging That Will Make You Cringe, But It’s A Dirty Truth You Cannot Walk Away From 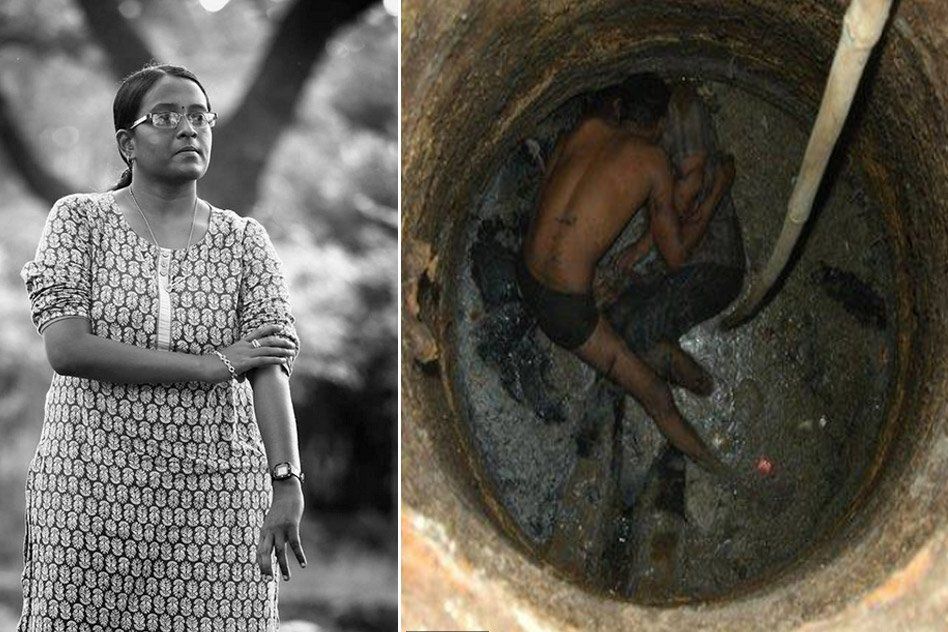 The camera is set to focus and the shutter is released.

An image of a filthy sewer overflowing with faeces, discarded sanitary napkins and dead rats, is exposed.

You cringe a little.

The focus is now shifted to the haunting images of a man wearing flip flops collecting the faeces with his bare hands, a middle-aged woman unclogging the drains by lifting sanitary napkins using two sticks as tongs and humans plunging deeper and deeper into the sewer to collect the filth.

You cringe a little more.

But as you continue watching, the searing images will no longer disgust you. Living in a world where humans are belittled to roaches, will.

These scenes are from ‘Kakkoos’ (Toilet), a Tamil documentary on ‘manual scavenging’.

25-year-old Divya Bharathi’s film captures the uncomfortable truth most of us living in our urban bubbles are unaware of.

While we are sickened by the sight of a hair on our food, imagine collecting heaps of faeces with your bare hands.

Speaking to The Logical Indian, Ms Bharathi took us through the reasons behind the existence of this inhumane practice still plaguing our country in the year 2017.

“Since 1993, manual scavenging is banned in India under the Employment of Manual Scavengers and Construction of Dry Latrines (Prohibition) Act. But it continues to exist due to casteism and lack of practical measures undertaken by the government. Despite reeling statistics that show machines have replaced humans, that’s hardly the truth”, revealed MS Bharathi.

Kakkoos was shot is 25 districts across Tamil Nadu and was released last month. It shows the miserable lives and working conditions of the manual scavengers of Tamil Nadu.

Casteism is the primary reason for the continuance of manual scavenging. Not only is the Arundathiyar Dalit community affected by it, but depending on the district and the city, the Kaatu Naicker community and various sub-sects of Dalits, Chakiliyar, Irular, Kuravar and many other communities are also forced to engage in the practice.

The workers are hired by private contractors who send them on cleaning jobs, including jobs in private residences.

Men are usually truck drivers and are given the job of cleaning out septic tanks and drains, while the women are sweepers who collect garbage and push carts. As with every ‘job’, workers of manual scavenging witness gender inequality too. The women are economically and sexually abused, and are forced to work the night shift. Contrastingly, the men are given the day shift as they might ‘wander at night’.

Growing up, she remembers the power that the owner held over his employees and the way his word was held as law. Such capitalistic exploitation compelled her to join the CPI (ML) when she was a young standard-nine student.

Furthermore, being exposed to the world of alternative cinema as a child made her fall in love with filmmaking. A former student of Visual Communications at the American College (Madurai) in 2008, she pursued her dream. However, Divya was expelled from college for her involvement in a student protest and later joined the Madurai Law College. Due to her continued participation in student politics, she had to take a transfer again and join a law college in Chennai.

During her time as a social activist, she saw the death of a labourer due to torturous working conditions. Five-to-ten- labourers die every day due to manual scavenging. The reality of this practice persuaded her to make the documentary.

The agonising truth of manual scavenging in India

“As a sweeper, my work is only to remove the garbage. But the streets are littered with human waste, and I cannot refuse to clean them”, a woman worker in the film says.

“I throw up constantly. What I see haunts me throughout the day,” says a worker. “My daughter refuses to take anything from my hand,” grieves another woman.

It’s a plight they cannot escape from, as the work, though filthy, is also their only source of income.

The government does not even provide brooms, dust pans, masks or gloves to the workers. They are forced to buy all equipment themselves.

It is safer to work in open areas”, says a labourer. “Cleaning toilets covered by walls is far more hazardous and inhumane,” she added.

On the one hand, the government advertises campaigns such as Swachh Bharat, while on the other, exploitation of citizens is normalised.

Ms Bharathi doesn’t hesitate to point a finger at the government and neither does her film.

There is no reasonable explanation for the dehumanisation of manual scavengers in the 21st century.

The Logical Indian strongly condemns this practice and urges the government to implement laws to protect manual scavengers. We wish to express our heartiest gratitude to Ms Bharathi for bringing this dismal reality to our notice. It becomes the responsibility of each of us, as residents of the planet, to spread awareness about the truth about manual scavenging and persuade the government to prevent its continuity.