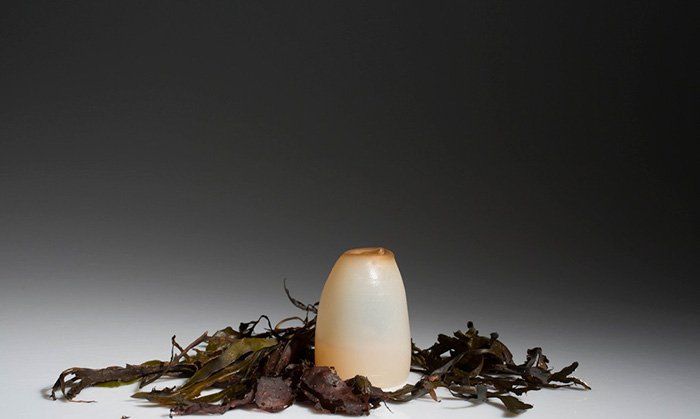 Algae could save the world from plastics
Ari Jonsson, a product design student of Iceland academy of arts has found a solution to the menace called plastics by creating a biodegradable bottle made from Algae. He combined the red algae powder with water to create this “unique” biodegradable bottle. A plastic bottle takes up to 450 years to decompose. Approx 40 billion bottles littered globally are made from millions of barrels of oil not to mention the enormous environmental damage plastics have done.
Ari Jonsson said “I read that 50 percent of plastic is used once and then thrown away so I feel there is an urgent need to find ways to replace some of the unreal amount of plastic we make, use and throw away each day” . “You could even bite the bottle”.

Jonsson exhibited this project during a design festival held from 10 March – 16 March. He studied the strength and weakness of materials that he could use as a substance for creating a water bottle. Eventually, he came across a powdered form of agar, a substance made from algae . He then rotated the mould while deluged in a bucket of cold water. He placed it in a freezer for few minutes before the algae bottle was extracted from the mould. As long as it is filled with water, the shape of the bottle will remain in its shape. However, once it is emptied, the bottle will start shrinking to decompose. The bottle is made from 100% natural resources, so, it is safe to drink water stored in it. The best part is that the bottle is edible. If someone likes the taste, can bite it. 80 percent of the trash that ends up in the oceans comes from land-based sources and nearly 90 percent of that is plastic.

“If it fails, or if the bottom is too thin or it has a hole in it, I can just reheat it and pour it into the mould again,” said Jónsson. The logical Indian lauds the efforts of Ari Jonsson in addressing the problem of plastic pollution. Let us do our bit in avoiding plastics during our daily routine and remind ourselves and spread awareness of the harmful effects of plastics on the environment.