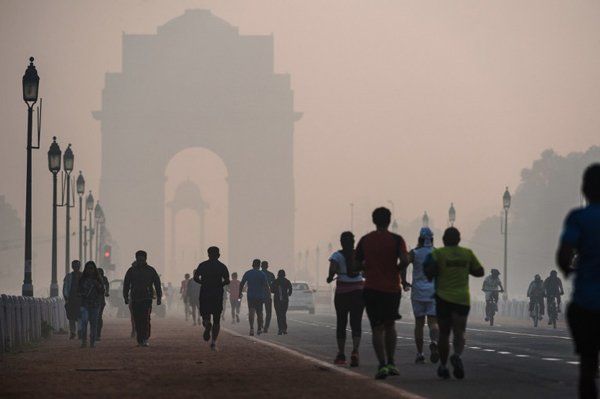 What PM2.5 Pollution Really Means And What It's Doing To You And Your Kids

On the morning of 29 November, Beijing woke up to air pollution levels not seen in over a year. The city’s government immediately issued an alert and ordered factories to stop or reduce production.

The same morning, Delhi woke up to pollution levels much higher than Beijing’s.

And it hosted the Delhi half marathon.

In the name of health awareness, the runners breathed air laced with pollutants exponentially beyond safe levels. And they inhaled 10-20 times as much air as a sedentary person does.

In sharp contrast, the embassies of Norway and the United States have taken urgent steps to safeguard their personnel. While Norwegian officials are set to get “hardship pay” for working in New Delhi, the US embassy’s school has cancelled outdoor activities for its students.

The stark difference in attitudes, perhaps, is because most Delhiites know little about how exactly the city’s air is killing them. Slowly. Daily.

The government has largely failed to make people aware of how the pollution affects them, what the main pollutants are, what precautions they should take, the types of masks they should wear, and suchlike.

It only dumps air pollution data on a rather glib website, on a page full of numbers and technical terms befitting a chemistry textbook.

There is no air warning system in Delhi that could alert citizens, shut down schools and prohibit outdoor activity when pollution reaches hazardous levels. Most of all, though, the residents should know what exactly makes Delhi’s air so toxic. Even if you know what it is – the toxin is called PM 2.5 – there is no easy way to know how harmful it is.

So, here’s a primer.

Why are we talking about PM2.5?

Delhi’s air is not polluted as much with poisonous gases as it’s with really tiny particles known as PM2.5. And its levels are consistently 16-20 times higher than the prescribed standard. At the time of the half marathon, it was 48 times the limit.

Greenpeace recently found that even inside Delhi’s classrooms, PM2.5 levels were 11 times the limit.

There is no easy answer to this since the toxin is identified more by its size than what it contains. It could be a variety of solid or liquid chemicals.

According to the United States’ Environment Protection Agency, a PM2.5 particle, depending on where it’s emitted from, could contain compounds of any of these four materials:

While individual particles obviously can’t be seen without special equipment, large amounts are visible as haze or smog.

WHO says PM2.5 level mustn’t exceed 25 mg/cubic metre. Yet, India has relaxed the limit to 60

What’s the best protection from PM2.5?

Only way to reduce PM2.5 is to stop it at source – cars, factories, waste burning, thermal plants