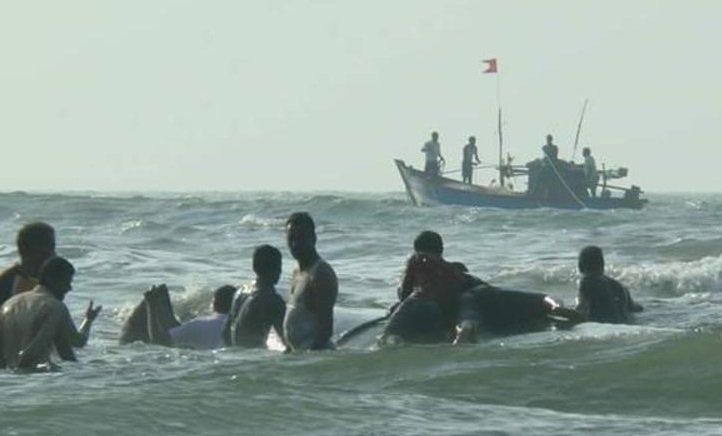 In Pictures: 40-Feet-Long Whale Saved After A Nine-Hour Long Operation In Maharashtra

A 40-feet-long blue whale was washed over to the shallower waters along the beach at Kolthare village, Dapoli, Ratnagiri of February 1. The incident was reported to the authorities by the locals, and soon the whale was rescued by marine experts with the help of some locals.The whale, weighing approximately 25 tonnes, was seemingly stranded in the shallows during the night because of the high tide and was then trapped in the sand.

Acc. to DNA Upon reaching the spot, they saw that the whale stuck in the sand. Efforts started to keep it in water, while a veterinarian checked the mammal for any injury.

“The vet found that the whale was suffering from some infection, he administered an injection and then the whale started beating water with its tail,” Upadhye added.

A herculean task involving watering the whale and checking its vitals was carried out for more than five hours.

N Vasudevan, Chief Conservator of Forests told how the whale was tied to two boats and taken 3 kilometres into the sea. This is the first incident where a stranded whale has been rescued, after a series of incidents about whales being washed ashore recently. Whale stranding has happened in multiple locations across the world including California where whales have got stranded and died. The stranded whales do not return to the waters as if it is on a suicidal mission.

A few days ago, a 37 feet long Bryde’s whale, an endangered species, died after being washed ashore at Juhu beach, Mumbai. Carcasses of 38 Baleen whales were washed ashore recently near Tiruchendur beach, Tamil Nadu. The reason as to why there have been these many accidents is not entirely clear.

One possibility could be the increase in sound levels from ship traffic, sonic testing and oil drilling which interferes with the navigation of the whales which in turn, drives them to the shores.

The Logical Indian applauds the marine experts and the locals for successfully saving the whale. In almost all the past instances the whales which got stranded to the shore have died on the shore. Incidents like these are disturbing, and can be controlled by control and limitation of human activities which pose a threat to marine life, in addition, there can be increased awareness at beaches to inform the authorities of such sightings. There should also be prompt reaction on behalf of the marine rescue experts to save the whales and facilitate their return to deeper waters.