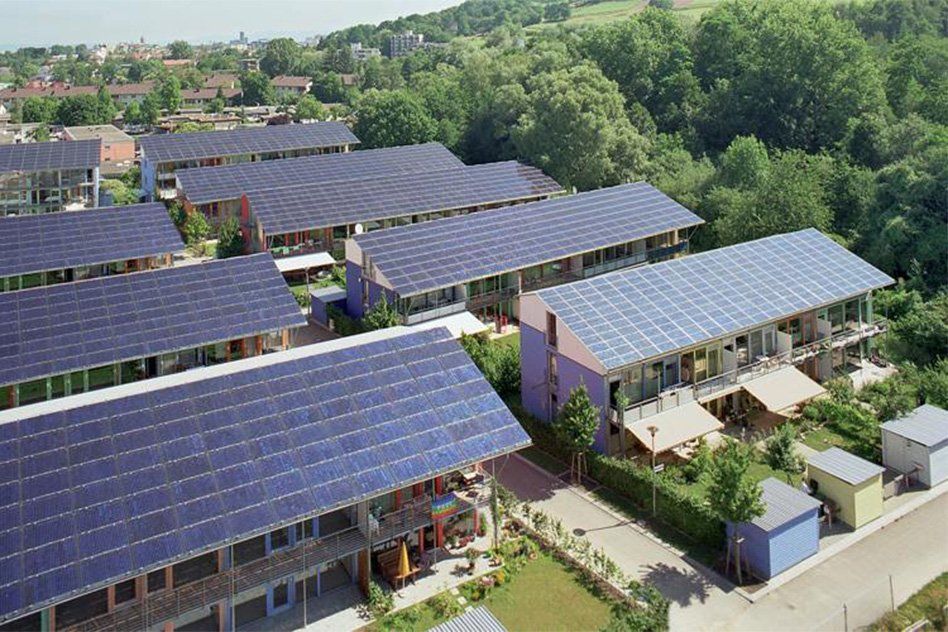 We have known cities to be great power-guzzlers, having a huge appetite for consuming electricity to power its homes and buildings. To generate electricity for such cities through renewable sources like solar becomes a difficult task given the vast amount of area required to place the solar panels. But a city in the heart of Germany has achieved something more incredible. It not only has made itself self-sufficient in energy, but in fact has become a net producer of energy – all thanks to a localized approach for adopting solar power.

The Solar cities of Germany:

The Sonnenschiff and Solarsiedlung cities located in Freiburg, Germany are modern, planned habitations that were worked upon with solar power in mind. Literally meaning Solar Ship and Solar Village, the Sonnenschiff and Solarsiedlung cities were specifically designed and built to be solar cities, balancing size, accessibility, green space, and solar exposure. Each of the fifty-two homes along with some commercial buildings is fitted with large rooftop solar panels that double-up as sun shades. The panels are perfectly aligned to point in the right direction of the sun, and the buildings follow the Passivhaus standards of green building technology.

The cities have been designed by architect Rolf Disch. Together with the latest photovoltaic technology for the panels that make them highly efficient, and use of phase-change materials and vacuum insulation for the walls of the buildings that provide optimum thermal performance, the cities are able to generate four times the power which they consume.

The success of solar as an alternative to the polluting coal-fired power is not limited to these twin-cities. The entire area of Freiburg has been leading the country into a solar revolution since a long time. It was once on the crossroads of choosing between solar and nuclear as the preferred alternative source. Infact a nuclear power plant had already begun construction near Freiburg in early 1970s, amid protests from students and farmers who saw nuclear as a dangerous and polluting source of energy.

A major change in mindset of the local population came when an engineer Dieter Seifried started an institute to research into alternative forms of energy and popularized solar as a safe, reliable and efficient source. Seifried said regarding nuclear power in an interview to CBC news, “you will see first that it is not clean at all, second that it is expensive and third that we have a lot of unsolved problems like where do we deposit the waste.” Gradually more and more residents started to install rooftop solar panels on their houses and ditched the conventional power from grid. In 2000, Germany tabled a clean energy bill that forced power-companies to pay a set fee called a feed-in tariff to anybody providing power to the grid. This gave an impetus to the efforts of Seifried and others, and today, 30% of Germany’s electricity comes from renewable sources, mainly wind and solar. The nuclear plant being built in Freiburg was shut down soon after the protests, and after the unfortunate Fukushima meltdown in Japan in 2011, Germany has committed to phase out all 17 of its nuclear reactors by 2022.

The examples of Freiburg and the solar cities show how people themselves can own up the process of transitioning from conventional methods of energy generation to cleaner alternatives. The role of government in incentivizing renewable energy and providing access to technology is also very important. The Logical Indian gives a big thumbs-up to the residents of Freiburg for kickstarting the solar revolution in their country, and hopes that similar initiatives are taken up by people across the world.
– Abhishek Mittal