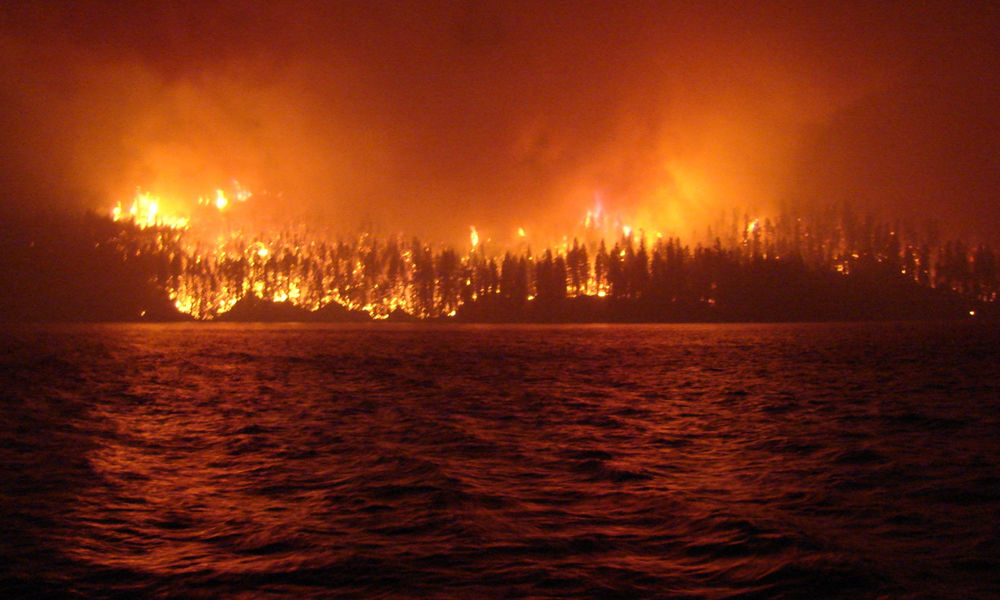 For three weeks, wildfires have been raging across Oregon, California and Washington, burning millions of acres, destroying thousands of homes, and forcing tens of thousands to flee their homes.

At least 35 people have been killed by the wildfires that have ravaged the United States' West Coast, officials said.

For three weeks, wildfires have been raging across Oregon, California and Washington, burning millions of acres, destroying thousands of homes, and forcing tens of thousands to flee their homes.

Amid high winds and dry conditions in Oregon and some California counties, the National Weather Service has also issued a "red flag warning", which indicates extreme fire conditions.

Authorities have stated that the conditions are expected to "contribute to a significant spread of new and existing fires."

In the past week in Oregon, at least 10 people have died in the fires. Officials have meanwhile stated that several people are missing and that the death toll is likely to rise.

Meanwhile, in California, 24 people have died since early August, and one person has been killed in Washington state.

According to a report by The Guardian, in Oregon, as many as 40,000 people have fled their homes and over half a million were under some level of an evacuation order. In addition, over a million acres have been scorched in the flames.

While officials have said that dozens more were missing in Oregon, local reports on Sunday suggested that most have since been accounted for.

National fire officials stated that the fires across several states have so far consumed 4.6 million acres, reported CNN. While the 94 major fires are raging mostly in the rural and forested areas, major cities along the West Coast, such as Los Angeles, San Francisco, Seattle and Portland, Oregon, are also affected.

The smokes from the blazes result in unhealthy air quality, which can irritate lungs, cause inflammation and affect the immune system, heightening the risk of lung infections such as coronavirus.

"Clean air centres" have also been opened in Oakland, California, for those who have no place to go as several businesses and facilities are closed due to statewide COVID-19 restrictions.

While 25 of the fires are in California, 16 are in Washington, 13 in Oregon and 10 in Idaho. However, fires have also occurred in Alaska, Arizona, Colorado, Nevada, New Mexico, Utah and Wyoming.

"More than 30,000 firefighters and support personnel are assigned to incidents across the country," the National Interagency Fire Center said on Sunday.

In the small city of Detroit, Oregon, the majority of the structures in the rural enclave have been destroyed by the fires.

"We have approximately 20-25 structures still standing, and the rest are gone...Our primary focus is protecting the structures that are still standing," officials with the Idanha-Detroit Rural Fire Protection District said.

"Several of our firefighters have also lost their homes. They are working through their own losses while also fighting to protect homes still intact," the officials added.

Elizabeth Smith, one of the residents who lost everything in the fire told CNN affiliate KATU-TV, "Our homes are absolutely destroyed. I've seen a few videos and photos and my lovely little house that we remodelled 12 years ago in this beautiful canyon area is absolutely flattened. It looks as though a bomb went off."

Over 160,000 acres in the Willamette National Forest have been torched by the Holiday Farm Fire east of Eugene, Oregon. The fire, which is growing rapidly, spread 5,000 acres on Friday alone.

Nailah Garner, from the town of Vida, in the middle of the forest, was forced to flee her home last week. She said, "We didn't know what to grab. We didn't pack. Who knows what to do when you're going through this?"

"It's all gone, and it looks like a war zone hit it," she added.

In California, firefighters are tackling over two dozen major fires and officials stated that three of the five largest wildfires in state history are burning currently. The LNU Complex Fire, one of the fires, has burned over 363,000 acres.

However, officials are hopeful that the improving weather conditions will help in controlling the blaze.

Over 4,100 structures have been destroyed since August 15, agency Cal Fire said. It added that 16,750 firefighters are battling fires across the state.

This year, fires in the state have burned more than 3.3 million acres, a majority of which have been due to the August Complex Fire burning in the Mendocino National Forest. Cal Fire stated that the fire is the largest in the state history and only 28 per cent have been contained so far.

Meanwhile, the North Complex Fire in the Sierra Nevada range north of Sacramento has destroyed over 258,000 acres and killed at least 12 people, according to the US Forest Service.

While generally, fires consume about 500,000 acres a year in the state, but "this week alone, we burned over a million acres of beautiful Oregon," Oregon Governor Kate Brown said.

"This could be the greatest loss of human life and property due to wildfire in our state's history," she had earlier told a news conference.

Washington Governor Jay Inslee said that the past five days in Washington have made for the state's worst fire season in history. Inslee visited Malden in eastern Washington, earlier in the week, where 80 per cent of the city's buildings, including the fire station, post office, city hall and library, were destroyed.

Meanwhile, President Donald Trump is slated to visit McClellan Park, California, on Monday for a wildfires briefing. Several politicians have also slammed Trump for his response to the crisis.

Several claimed that Trump deliberately ignored the crisis as it is happening in Democratic-controlled states.

"We need leadership that is equal across this country instead of being partisan and divisive. We need actual help, material help not based on our party affiliation and not how we voted," Eric Garcetti, the mayor of Los Angeles said.

"This is climate change and this is an administration that's put its head in the sand. This administration [is] the last vestiges of the flat-earth society of this generation," Garcetti added.