Under the supervision of the officer, the district administration adopted the core strategy of convergence and collaboration, amid various departments. Kundan Kumar wanted to create a model through which the rough and barren lands could be converted into green covers.

The Banka district in Bihar is situated in the south-east corner of the state bordering Jharkhand. The Indian Council of Agricultural Research (ICAR) categorizes the district in the Eastern plain of the hot sub-humid region. Considering the rough terrain and landscapes in this region, it is not easy to plough the barren patches of land in this district. Although the District Magistrate, Kundan Kumar brought together smart agriculture practices to convert barren lands into green covers.

The barren lands in the district are majorly affected by its surface runoff, loose topsoil, extreme climate conditions, and unavailability of stagnant surface water. Under the supervision of the officer, the district administration adopted the core strategy of convergence and collaboration, amid various departments. Kundan Kumar wanted to create a model through which the rough and barren land could be converted into green covers. As it was not an easy process, the district magistrate made sure that he routinely visited and examined the situation on the ground. Creation of trenches on the land that is being cultivated.

For implementing the huge task, district administration started with convergence between departments, like the Soil Conservation Department, horticulture and department of micro-irrigation. Promoting permacultures as climate-smart agriculture practices has been the vision behind the step of making forest covers. The transformation of these barren land is a perfect example of the sustainability of suitable agriculture techniques. Using sustainable methods on barren lands to convert it to green covers.

In a conversation with The Logical Indian, Kundan Kumar said, "The issue of surface runoff and loose topsoil on barren lands were addressed at a time by promoting the permaculture through orchards and by providing micro-irrigation system. Different departments were allocated the task according to their expertise and domain knowledge. Soil conservation department started with identifying the barren land in the district. A 170 hectares land was identified in Ghutia panchayat of Banka district. While identifying the location, departments considered the aspect of quality of soil and availability of water sources."

The District Magistrate visiting the land where the plantation is being done.

The areas with steep slope are prone to soil erosion due to lack of vegetative cover and accelerated transportation of soil. The hilly area exhibits the characteristics of high rainfall, quick drainage that provides little retention time to the runoff to infiltrate into the soil profile. The trenches constructed in these regions of address the problem of soil conservation to act as flow barrier by restricting the flow of water within the safe limit. For tackling this problem, Kundan Kumar followed the method of 'staggered trenching'. With this, water conservation on the plantation sites in Banka was getting facilitated. As a result of its implementation, the barren region was converted into productive land and the soil conservation practices were also being done. 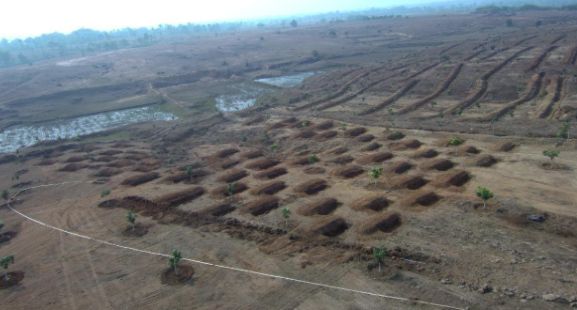 "The staggered trenching involves the excavation of trenches of shorter length in a row along the contour with interspace between them. Suitable vertical intervals between the rows are restricted to impound the runoff without overflow. In the alternate row, the trenches are located directly below one another. The length of the trench and the interspace between the trenches in the same row should be suitably designed such that no long unprotected or uninterrupted slope to cause unexpected runoff or erosion. Not only in this orchard, this type of trenching has had been practised in different parts of the district for soil conservation." shares Kundan Kumar while speaking with The Logical Indian. The local community members working on the site in Bihar

As the soil quality was maintained with sustainable agricultural practices assisted by the District Magistrate, the orchards plantation was done by the local community members. Agro-waste and decomposers were also used to ensure a sustainable approach for the entire process. Contour Trenches are a simple, low-cost method of checking the velocity of runoff in ridge area of any watershed.

This method was also adopted in converting barren areas into orchards. The farmers in the district implemented the same methods and are now reaping its benefits. The farmers in the district who took up the task of mango cultivation are extremely happy with the results. One of them planted nearly 800 mango saplings and sold them in years 2018-19 earning a profit of ₹15 lakhs. Such marvellous examples have even motivated other farmers to follow the same method on their lands. The mango orchard that was created as a result of sustainable farming practices.

Due to the conversion of barren lands, the district's forest cover is increasing. As the district has faced consecutive droughts in recent years, the groundwater layer is constantly depleting. By using such unique methods, the locals are ensured that they don't suffer a shortage of water around the year during farming activities. Different kind of trenches will help in storing the surface water. The plantation also helps in maintaining soil moisture retention.

Such sustainable methods have structured such a way that it can ultimately boost groundwater storage. Cultivable lands around these converted areas are also being benefitted. Apart from the environmental aspect, it has created livelihood options and providing overall development of these remote locations.

The Logical Indian appreciates the efforts of the District Magistrate who has set up a sustainable model for agricultural practices in Bihar.