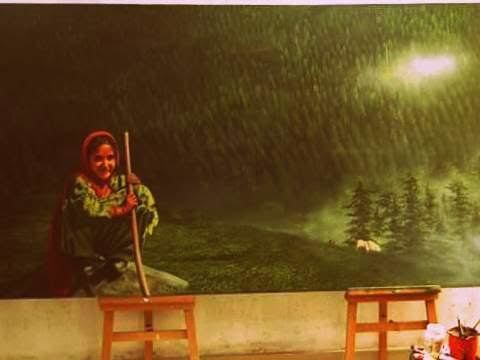 The article focuses on how tribal artist K.K. Gandhi through his artistic works has been able to promote the migratory lifestyle, culture and spirit of Gujjars and Bakerwals of J&K.

K.K. Gandhi used to be a business man but driven by his artistic streak, he has now accomplished himself as a known painter of J&K. His manner of painting is based on realism – what he sees, he draws without using any computerised effects etc. He paints the heritage of J&K, with special reference to tribes of the state. These tribes live in the lap of nature, and nature is something which has had always fascinated him. He captures these nomadic communities, the green landscapes, and how a tribe lives in peaceful relationship with the mountains and waters of nature. It is this serene coexistence of the aboriginals with the nature, that K.K Gandhi wishes to capture. For his contribution to the promotion of these tribes, and his creativity, K.K. Gandhi has been felicitated with Award of Honour by the Honourable Governor of Jammu and Kashmir, 2015. He was conferred Artist of the day award at Jaipur International Art festival, Diggi palace, Jaipur 2013 as well as awarded by J&K Academy of Art, Cultural and Languages 2005. Due to his signature style of realistically depicting the life and lifestyle of tribes and nature, K.K. Gandhi is known by the epithet Nature Man.

The artist though appreciates their way of living, he still hopes these people would at least correct some aspects of their lives such as child marriage, lack of education for the kids, and other things which were discussed in Part I of the article. In this article, the target is to know the interests of a tribal artist through the words and works of K.K. Gandhi. Why did you choose to paint Gujjars and Bakerwals?

Why draw something in abstract, why not something which we should be able to identify with. I draw the original dwellers of our land. So our generations can know about them, and the people out of the state can also who our aboriginals are.

Which aspects do you highlight about Gujjars and Bakerwals?

Their attire, ornaments, utensils, tents, and cattle. I draw them in herds, mainly children while their cattle is grazing in the plains and hills.

Do you meet them, see them in person? How do you find them as people?

Very down to earth. They are not derisive of outsiders, very friendly indeed. But very innocent too. But some of their customs I am against, like child marriage and I even argue with them, but they do not listen. Most of them are like this, but some are turning the tide and you can see Gujjars becoming doctors, engineers and KAS, IAS officers.

Was it not risky to take up drawing tribals?

It is a risky gamble as there are not many artists who draw tribals. There are hardly any tribal artists from J&K, but out of state like MP, there are many. I have seen scores of experts, students and art-lovers who come from abroad to appreciate the works of these tribals artists, but in J&K, there are very few to create a stir. Yes it was risky, but I guess my passion subdued my concerns. When I took it upon myself to capture the tribes, it was only later I received recognition for this work and many even begun to follow my work.

So we can say you pioneered the way for tribal artists in J&K?

I just hope we see more artists picking this up. I will be content once more tribal artists emerge to highlight the Gujjars.

Are there any Gujjar tribal artist?

It is a sad reality, that there is no tribal artist from this community. In my endevours, I constantly search for one but no such luck. I hope there emerges some artists from the community, I hope.

What message would you like to give to our readers?

I must appreciate the work done by The Logical Indian in capturing stories which hardly get noticed in the media. It shows that people want to know about the grassroots, and it certainly is something. In the glimmer of this and that story, we tend to forget the ground reality, and it is praiseworthy that such stories are sincerely covered by The Logical Indian.