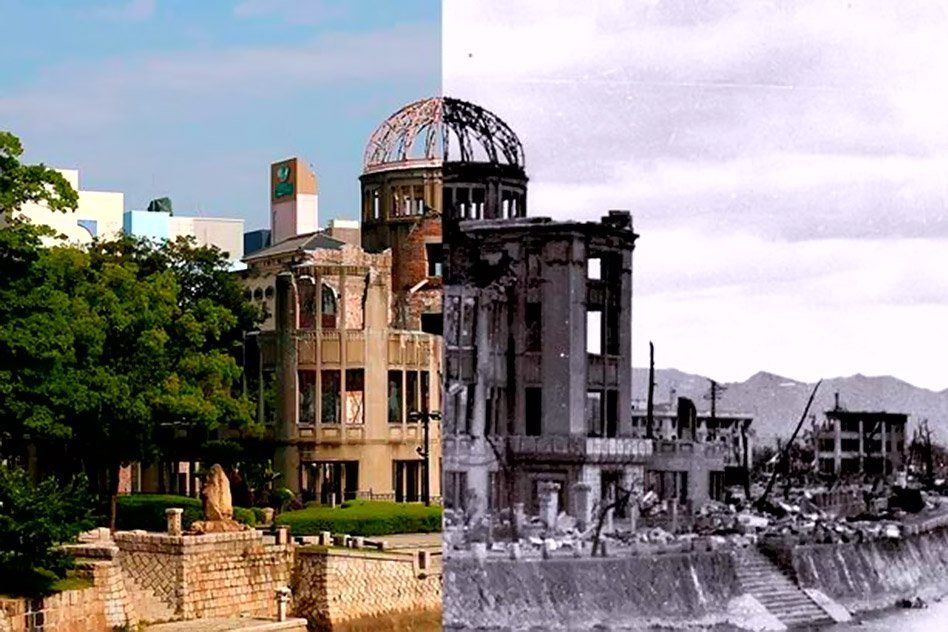 Hiroshima 'Then And Now': Remarkable Images Of City Which Rose From The Ashes Of Atom Bomb

Below Now-and-then images reveal how Hiroshima has become a modern metropolis 70 years after it was devastated by an atomic bomb. (Symbol: Now the Atomic Bomb Dome, the building is a symbol of hope 2015)

The bridge, less than a mile from the city centre, now bears little resemblance to what was there before.

The modern gateway looks across to high-rise apartment and office blocks where once only the mountains could be scene beyond a scorched wasteland. (Harrowing: The city shot from the Aloi Bridge in 1945) (Modern: Today the scene from the same position is barely recognizable 2015)

Photographer Eugene Hoshiko, who grew up in Yokohama, on the otherside of Japan, travelled to Hiroshima to see for himself what had become of the city. He said: “The city I found was very much rebuilt and alive, with a population today of 1.2million. (The Urakami Cathedral now houses artefacts from the bombing 2015)

Much of the early rebuilding was done by residents acting on their own initiative as the city could only source around five per cent of the funding it needed to rebuild.

Reconstruction projects were given extra financial assistance and an emphasis was placed on rebuilding investment and trade links by Japense Government .

The city embarked on a rapid period of building and has continued to blossom with the same momentum in the following decades. (Decimated: The Medical College, surrounded by rubble in August 1945) The heat from the eye of the blast was so extreme, shadow marks were left on the surface of the Yorozuyo Bridge where railings had blocked the intense thermal rays. (The Yorozuyo Bridge, with the blast marks on the ground) Today Hiroshima has been revived and has become a city of culture and prosperity.